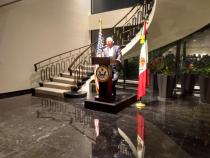 MEXICO CITY — Two Arizonan committees are on a business trip in Mexico City. One of them is from Phoenix and focuses on innovation and trade, while the other is from Tucson and looks to strengthen research and education.

The city of Phoenix’s office in Mexico City is hosting a trade mission.

The delegation is meeting with Mexican authorities in economics and foreign affairs, as well as with innovation-driven businesses working with genomics and clean technologies, among others.

Another group with a strong interest in sustainable development is a delegation from the University of Arizona, led by Robert Robbins, president of the institution.

“With all the changes that are going on with climate change and the environment, to be sustainable in terms of food security, certainly water and energy, we’re gonna need to work together,” Robbins said.

The UA delegation will meet with representatives from the Mexican public and private sectors.

EDITORS NOTE: The story has been updated to include the correct photo of Robert Robbins.