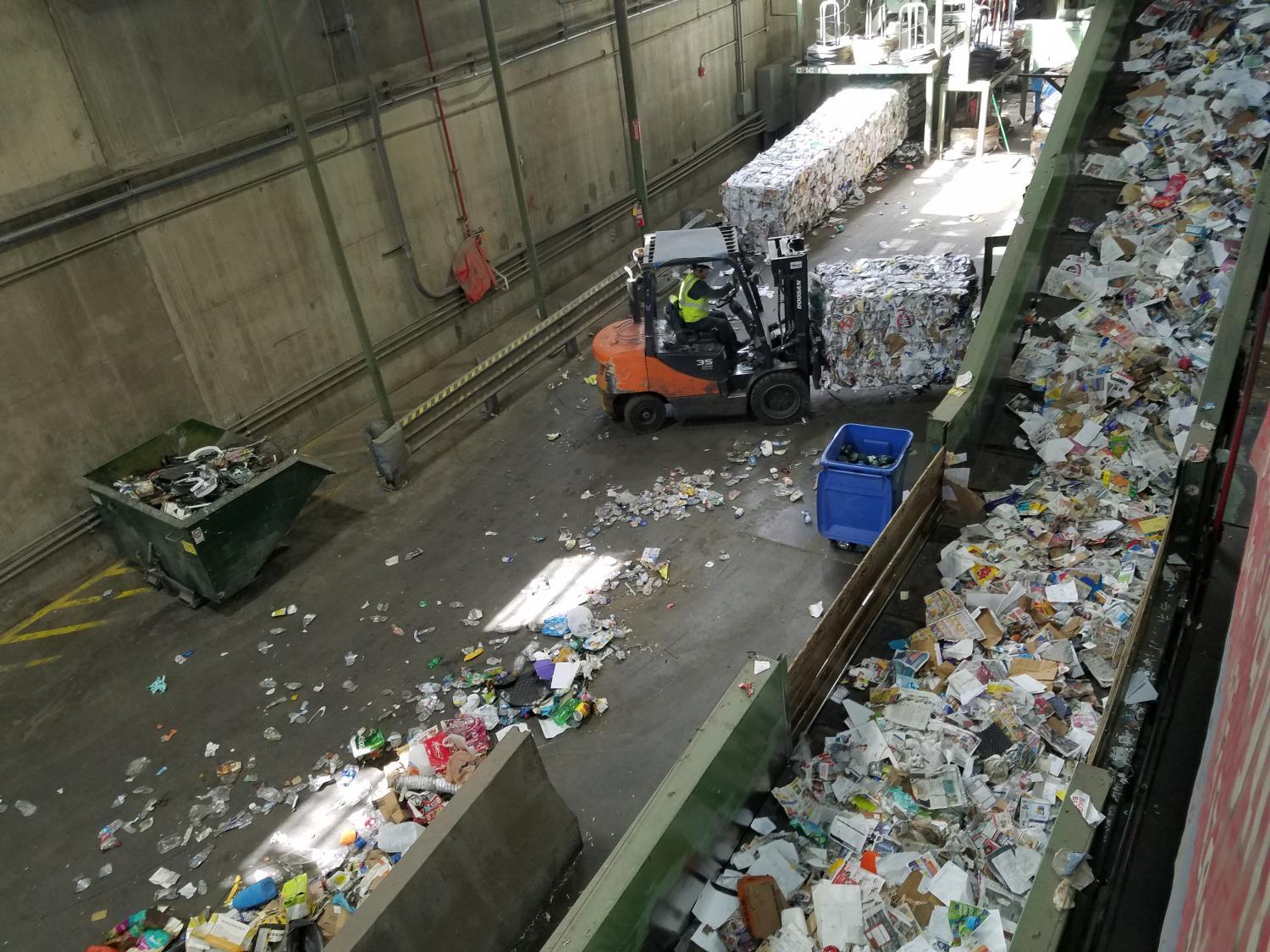 Annika Cline/KJZZ
A forklift driver moves bales of sorted recycled material while a conveyor belt delivers unsorted material to the people who will sort it in Phoenix.

U.S. recycling has nearly collapsed, prices have soared and the environmental waste problem has hit a crisis point, since China, the largest buyer of U.S. recycled products, stopped buying nearly 18 months ago. Now, recycling centers are looking to rebuild processing plants across the U.S. and that requires a policy change and millions in new funding.

A $2 trillion infrastructure bill did not make it through Congress this year. It died in April and along with it, a plan to fund big projects across the country like upgrades to highways and bridges, building out broadband service in rural areas, and modernizing U.S. recycling plants so that domestic centers can become the processor that China once was.

"We’re asking for $500 million over five years that would be appropriated to EPA that the EPA would then distribute to the states and the states would then provide it to eligible entities," said David Biderman, Executive Director of SWANA, the Solid Waste Association of North America. Part of his job is to advocate for federal funding. Now that the infrastructure bill is dead, this funding ask is through something called the RECOVER Act.

RECOVER stands for Realizing the Economic Opportunities and Value of Expanding Recycling, part of a long-term plan to end U.S. recycling’s dependence on China.

"I think that we’re going to see continued reduction in the amount of recycling that is exported from the United States," Biderman said.

We already are. China dried up. Malaysia and the Philippines tapped out and are refusing to take more from the United States. Even Canada has sent material back.

"Recycling is just hard. There’s not, there’s no federal policy, there’s nothing on the books at the federal level to say how recycling should happen or where it should happen," said Cole Rosengren, senior editor for industry magazine Waste Dive. He says long term U.S. facilities face a fundamental shift in recycling operations, one that takes new funding and new policies.

"Recycling is just hard. There’s not, there’s no federal policy, there’s nothing on the books at the federal level to say how recycling should happen or where it should happen."
— Cole Rosengren, Waste Dive

Because waste companies have exported recycling for so long, the U.S. has no recycling infrastructure to do the job here — no set standard from one city to another on what a recycling process is, no regulations and nowhere near enough mills up and running to process the paper and plastic material collected every day.

"It’s worth remembering that recycling, up until seven or eight years ago, was a very expensive proposition. It came into strength in the early '90s as a result of what was believed at the time to be a crisis in landfill space," said James Thompson, president of Waste Business Journal.

A lot of communities relied on the local private waste company to add on recycling services for trash pick-up. And recycling was subsidized, essentially, by the waste contracts, which became very profitable.

"So, you know, municipalities relied on the companies to create those markets and to bear those costs. And they did that by using the lucrative landfill contracts to help that," said Thompson.

The U.S. recycling industry has been built on a series of individual contracts. Increasingly, those contracts are owned and operated by the largest waste companies, Waste Management and Republic Services.

According to Waste Business Journal, U.S. waste and recycling was a $74 billion industry in 2018. Publicly traded companies, including Republic Services, make up 60 percent of that industry — a percentage that is expected to grow over the next decade. Rosengren says it is up to each city right now to find its own solution.

"City of Phoenix did utilize, for example, a no-interest loan from one of the big investment arms that’s out there for recycling money to upgrade their recycling facility. And so when cities do own or have a stake in their own sorting infrastructure. That’s probably where you’re going to see a lot of the money," Rosengren said.

Twenty-one domestic mills across the U.S. are on pace to be up and running by 2021. So far, none are in process in Arizona.