As Trump Leads In Arizona, Some Business Leaders Oppose His Message On Mexico

As Trump Leads In Arizona, Some Business Leaders Oppose His Message On Mexico 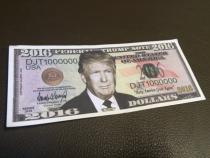 Jude Joffe-Block
Donald Trump campaigns on his business credentials but some business leaders in Arizona are worried about the leading Republican candidate's stance on Mexico and trade. 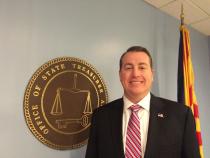 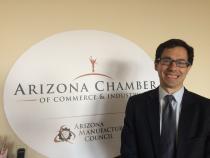 Jude Joffe-Block
Glenn Hamer of the Arizona Chamber of Commerce and Industry is a critic of Trump's trade policies.

PHOENIX – Some members of Arizona’s business community are watching Trump anxiously as the state’s presidential primary approaches on Tuesday. They worry the Republican front runner’s rhetoric on immigration and Mexico could prompt a backlash, something Arizona has seen before.

Six years ago Arizona lawmakers passed a bold immigration enforcement law, SB 1070. The law as written made it a state crime for unauthorized immigrants to seek work, mandated legal immigrants carry their documents and required police to ask about immigration status.

The law made Arizona ground zero in the national debate on immigration. So Phoenix was an obvious place for Donald Trump to hold a campaign rally not long after he entered the presidential race last summer.

“The word is getting out that we have to stop illegal immigration, we have to, we have to,” Trump told a large cheering crowd at the Phoenix Convention Center in July.

But here in Arizona, the state’s 2010 hardline immigration bill had an unintended consequence: the bill made the state a target for boycotts.

The same Phoenix Convention Center Trump appeared at last summer saw bookings drop 30 percent in the first few years after the 2010 law passed, and some blamed the state’s stained reputation.

A binational conference in Arizona between governors on both sides of the border was cancelled because the Mexican politicians indicated they would not set foot in the state.

“We were known for all the wrong reasons for a while, being a place that was not seen as welcoming to outsiders,” Ahlers said.

His firm now has a contract to represent the city of Phoenix’s trade interests in Mexico– one of the efforts the city has made in the wake of SB 1070 to improve the city’s relationship with Mexico.

“We do get questions about why should we work with Arizona, how do you view immigration, have your attitudes changed from what we saw several years ago with SB 1070,” Ahlers said.

Local and state leaders have made a point of traveling to Mexico to repair and strengthen trade and tourism ties, and it appears to be working. Mexico is Arizona’s biggest trading partner, and last year Arizona achieved record exports there.

But many here worry some of Trump’s famous soundbytes– such as those calling Mexican border crossers rapists and demands that Mexico pay for an expanded border wall– could reverse that progress.

“Poisoning the well so to speak with some of the rhetoric you get from Trump is not good for business and the business community is concerned about that,” Ahlers said.

Felipe Garcia of the company Visit Tucson, which promotes Tucson tourism, fears that if Trump makes it to the White House it could impact international tourism, particularly from Mexico.

“It happened to us with SB 1070, I was traveling to Mexico and people in Mexico thought that everyone in Arizona hated Mexicans,” said Garcia, who is a dual citizen.

Carlos Fernandez, the CEO of a company based on the Arizona border that manufactures aerospace parts in Mexico said the reputational damage of SB 1070 in Arizona should be seen as a cautionary tale for the rest of the country this election season.

“This is a wonderful case study that we actually have in our own state about what happens if we treat our neighbors in the South as if they are not our neighbors, but our enemies,” Fernandez said. “You have to look at the economics of how we suffered because of that, and that could definitely translate to the entire country.”

Fernandez said that so far his contacts in Mexico are not taking the possibility of a Trump presidency seriously.

Trump likes to say in his speeches that Mexico is “killing us” in trade. He has said American companies that move manufacturing jobs to Mexico and then sell their goods into the United States should be taxed, and has said he will make changes to the North American Free Trade Agreement.

But in Arizona, there is a prevailing view among business leaders that the state’s prosperity is linked to the strength of Mexico’s economy.

“The better our friends in Mexico are doing, the better we are doing in Arizona,” said Arizona Chamber of Commerce and Industry president and CEO Glenn Hamer.

Mexican visitors spend an estimated $2.5 billion dollars a year in Arizona, according to research by the University of Arizona Eller College of Management. Hamer argues when manufacturing jobs move to Mexico, it provides supply chain opportunities for American companies that would be lost if the manufacturing jobs had gone to China instead.

This primary season Hamer has been an outspoken critic of Trump’s trade policies, particularly Trump’s pledge to renegotiate NAFTA or his stated willingness to engage in a trade war if Mexico refuses to pay for a border wall.

But Trump’s Arizona Campaign Chairman Jeff DeWit insists that predictions of soured relations with Mexico if Trump enters the White House are overblown.

“I just think the word will go out that America wants to do a good job with our trade deals again and we want to have a strong immigration policy,” DeWit said.

DeWit, who serves as Arizona’s state treasurer, acknowledged that big corporations that want to manufacture their products overseas may not like Trump’s policies, which aim to protect American jobs. DeWit says that a President Trump would make better trade agreements than past administrations.

“I think that is something Donald Trump can bring is a business minded attitude towards these deals and I think it will be better for both sides,” DeWit said.

And it seems many Arizona Republicans agree. Polls show Trump has held a consistent lead here for months.

Trump is scheduled to hold two events in the Phoenix area on Saturday.