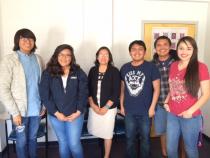 Over the past few weeks, we here at the Fronteras Desk and KJZZ News have been exploring hidden stories across the Americas with reports from our Transborder Unit-- specifically at the intersection between the U.S. and Colombia and this week we’ve heard about saving the once-dying Palenque language.

Closer to home, there's another language that also needs attention. As the largest tribe in the United States, more Navajos speak their mother tongue than any other indigenous language in the country. But the Navajo language is still considered endangered. And each year fewer Navajo children speak it. As such, there's an effort to not only preserve the language but to revive it.

Since the late 1800s, the federal government forced tens of thousands of Native American children to attend boarding schools, essentially wiping out their culture and language.

Evangeline Parsons Yazzie was one of those children.

"We tried so hard not to speak Navajo. But it’s so natural. It’s like swallowing," she recalls.

Yazzie remembers some particularly cruel tactics her teachers used to wipe her native words from her tongue in the second grade.

"It was the wintertime and our teacher told us we could not go out and play in the snow. We wanted to go so bad. All I said was ‘ya da la,’ which is an expression of frustration. She just grabbed me by the arm and yanked me to the sink. And she grabbed a bar of lava soap," she says.

Yazzie says getting a mouthful of soap was one of the milder forms of punishment for speaking Navajo.

"You get spanked. You get humiliated. You get put down so long that the status of the language changes. So it’s no longer this wonderful language that I learned that showed me so much about my world," she says. "And instead it’s becoming a painful language. Because of that a lot of parents chose not to teach their children the language."

Today Yazzie is a professor emeritus of the Navajo language at Northern Arizona University. For her doctoral dissertation she studied the language barrier among Navajo families.

"In some scenarios the elder would keep talking no matter what. And in other cases they both stopped talking and I think that’s the one that hurt me most was when silence reigned," Yazzie says.

As many as 170,000 people speak Navajo today but only a quarter speak it well, according to the U.S. Census. Last summer Navajo voters passed a referendum that allows for a non Navajo speaker to be tribal president. Many saw the vote as a turning point for the language and the culture. Some young people responded by taking the initiative to learn it.

At Northern Arizona University, several students gather after Navajo class. Twenty-year-old Cody Johnson says the referendum really worries him-- "What’s the point in having a Navajo Nation government if we’re not going to have our own unique identity?"

Johnson says the language-- even terms of endearment-- are a part of their culture and their ké or kinship.

"You don’t see that in western cultures. You don’t see a random elder going up to a younger person calling them my grandson. And we need to retain that bond and that system of ké among one another," he says.

Meanwhile, Kelcie Willie, a freshman with long curly hair and braces, says her great grandmother, who spoke Navajo fluently, was her biggest inspiration to learn.

Tearing up, Willie says, "On her deathbed I couldn’t like tell her like I love you and yeah… It was just like a huge language barrier for me."

Willie wants to become a nurse on the reservation, saying she’s determined to learn the language well enough to translate for elders who speak only Navajo.

Charla Keyaanie says her grandmother raised her on the reservation with a different philosophy.

"My grandma she used to tell my mom that Navajo was already a dying language so there wasn’t a point to learning about it," she says.

But when Keyaanie’s uncle, a medicine man, started to share Navajo teachings with her in her mother tongue, she wanted to know more.

As Professor Evangeline Parsons Yazzie says, many Navajo people are bringing the language back but the stigma and the pain associated with it often reverberate louder than the love for the language.