Report: Colorado River To Drop As Much As 27 Percent

Report: Colorado River To Drop As Much As 27 Percent 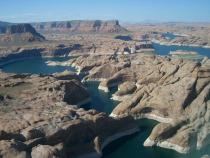 blanding-utah.gov
Water authorities in the Southwest promise to compensate towns, tribes and other partners for coming up with water saving strategies that will boost the levels of Lakes Powell and Mead.

The Colorado River and other Western river levels are expected to drop as much as 27 percent during the 21st century. That’s according to a climate change report released on World Water Day (March 22) by the Interior Department.

The reductions in snowpack and runoff could mean a drop in water supply both for irrigation and hydropower operations, according to the report. The Colorado River supplies water for 40 million people in the U.S. and Mexico.

The Bureau of Reclamation has connected the Colorado River Basin States with regional water authorities to come up with a strategy to adapt to drought and climate change. The program compensates tribal governments, towns, farmers and other partners for implementing water conservation projects that raise water storage levels in Lakes Powell and Mead.

The Interior Department also released an online tool where you can see climate change impacts in the region and learn more about potential adaptation strategies.