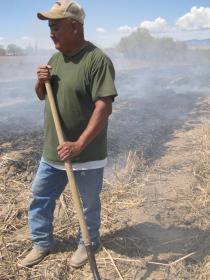 Laurel Morales
Irving Shaggy tames flames to prepare the soil on his Shiprock farm for alfalfa crops. He lost his entire crop last year due to a massive mine spill that contaminated his irrigation water. 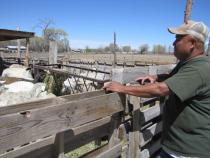 Laurel Morales
Irving Shaggy had to buy alfalfa and hay to feed his livestock, because last year's crop didn't make it after the spill shutdown the water. 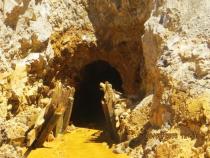 Environmental Protection Agency
On Aug. 5, 2015, the EPA was investigating contamination of this old Colorado mine when it unexpectedly triggered a release of 3 million gallons of toxic waste.

The growing season started in Shiprock, New Mexico, three weeks ago and Irving Shaggy is restless.

Shaggy shovels dirt over flames that creep across his field. He’s burning away the weeds and preparing the soil for alfalfa. But he hasn’t bought his seeds yet because last year he lost his entire crop.

“It’s very emotional,” Shaggy said. “We all get very emotional. I mean we spent a lot of days in the field-- hard work. And it’s like a waste. It’s a real big waste.”

Shaggy had to buy 1,000 bales of alfalfa to feed his sheep, cattle and horses and haul water from several miles away. So he’s anxious for the irrigation canal to reopen so he can grow his own crops.

“I’m concerned about the water quality but it’s been since last August and I think most of the bad stuff has gone downstream,” Shaggy said. “We’re just gonna have to take a chance on it.”

In August 2015, the EPA accidentally released 3 million gallons of toxic mine waste into the Animas and San Juan rivers while investigating an old mine. Thousands of people in Colorado, New Mexico and the Navajo Nation rely on the waterway. Hundreds of Navajo farmers lost their crops.

The federal government says the water’s OK. But the Navajo canal remains closed. And the question of whether to turn the water on has divided the community.

Joe Ben Jr. is the Shiprock Chapter Farm Board Representative. (A chapter is like a county.) He said his horses are getting too skinny. And the cost to haul the horses to auction is more than what they’d get for the animals.

Ben said it’s time to reopen the canals but monitor them closely. He shoulders a heavy burden, since he's thinking not only about his own farm but hundreds of others.

“I must be a leader and walk in the lead with the people. Walk with them, because I am them,” Ben said as tears filled his eyes.

And for the Navajo, farming isn’t just their livelihood. Ben said the Navajo spirituality begins in the fields. They use the corn pollen in ceremonies.

The farmers have voted to turn the water on. But chapter officials tabled the decision.

“We just don’t know,” said Chili Yazzie, Shiprock Chapter president. “We still aren’t sure on the level of contamination, the potential of bringing that contamination into our system and onto our farms.”

Just days after the spill, the EPA said the San Juan was back to “pre-event conditions.” That’s not too reassuring when hundreds of abandoned mines have leaked into the river for years. And contamination levels change depending on the weather, the river flow and when the current has kicked up sediment.

“Unfortunately the Navajo Nation and Shiprock has been a dumping ground downstream of polluters. And they’ve been ignored for way too long,” said Scott Smith, chief technology officer for Water Defense, a nonprofit group that investigates water disasters.

The EPA has made the Colorado mine area a superfund site, dedicating more time and money to cleanup efforts. And the agency continues to test the water, sediment and wildlife downstream. But they’re not testing for crops and livestock.

“The politics in areas that are impoverished with minorities, whether the Navajo Nation or Flint, they are afraid to say, ‘I don’t know,’” Smith said. “They are afraid to admit there are no standards.”

Last fall, Smith and independent toxicologists found nickel, lead and other dangerous chemicals in the San Juan sediment and in corn growing along the river.

Navajo President Russell Begaye said the EPA promised the tribe it would take full responsibility for the mine spill. But he said the agency hasn’t cleaned it up.

“We are going to continue to hold the EPA’s feet to fire because they did this, they knew it and DOI (Department of Interior) did their audit,” Begaye said. “And even they said, ‘It is your responsibility. You should be held accountable for it.’”

The EPA didn’t want to be interviewed for this story. A Senate committee has subpoenaed the EPA administrator to appear at an upcoming hearing to explain the agency’s “unacceptable response” to the Navajo Nation.