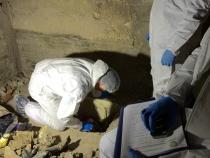 Mónica Ortiz Uribe
An anthropologist unearths a body at a crime scene in Chihuahua city, Mexico. 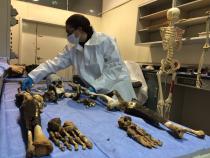 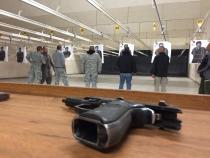 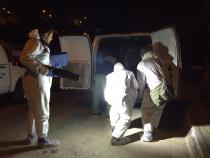 Mónica Ortiz Uribe
A team of forensic cops in load a body into their van at a crime scene in Chihuahua, Mexico.

CHIHUAHUA — Police in Mexico have failed to inspire trust in the citizens they’re supposed to serve. Now, as the country nears the end of an eight-year effort to transform its judicial system, police must turn their reputation around or else risk the system’s collapse.

In the northern border state of Chihuahua, one of the pioneers of judicial reform, police are showing signs of progress.

On the Friday night before Christmas, a team of forensic cops in Chihuahua city, the state capital, jumped in a police truck and drove toward a crime scene. The driver, Freddy Lopez, sped through traffic flashing his brights. He made a stop at a Days Inn near the historic city center to fetch the on-call anthropologist who happened to be at a holiday party. The anthropologist climbed aboard wearing a two-piece suit and a morose expression.

"We know there’s a dead body when we gotta bring this guy," Lopez said.

Back on the road they headed south toward a hillside barrio packed tightly with multicolored homes. Once there, the team got briefed by the lead officer with the state homicide unit.

Indeed there was a body. It was stuffed in a refrigerator buried in the dirt floor of an abandoned house. Police suspected a serial killer at work. It was the third body they’d found in less than a month bearing similar wounds. A protected witness tipped them off to this particular spot.

The forensics team zipped themselves into marshmallow-like body suits and pulled on latex gloves. Inside the house, they covered the victim’s hands in plastic bags to protect any biological matter under his nails. They bagged nearby beer cans and cigarette butts and photographed everything. Outside officers made sure the cordoned-off scene stayed secure.

Even this basic police work is something to marvel at in Mexico, where studies indicate 98 percent of crimes go unsolved. Judicial reform is meant to attack Mexico’s high rate of impunity.

"The fundamental feature of Mexico's new criminal justice system is that it inserts accountability into the process,” said David Shirk, an expert in Mexican criminal justice. “It allows the state's evidence to be questioned and challenged. It means that police have to do their job well."

In the past, a signed confession was enough to end an investigation and put somebody in jail. If it even existed, scientific evidence was just a bonus. Under the new system, the accused has more rights and is presumed innocent until the state can prove his or her guilt before a judge.

"These reforms are going to be the key to making it clear that the work has to be done, otherwise criminals are going to walk free," Shirk said.

The U.S. has poured millions in federal tax dollars via the Merida Initiative into this effort. Most of the money has gone to train Mexican judges, prosecutors and defense attorneys. A smaller portion has gone to train police, a critical part of reform that’s far behind schedule. Mexico’s congress approved a constitutional amendment mandating judicial reform in 2008. They set a deadline of June 2016 for full implementation.

While Chihuahua had serious problems with police investigations at the onset of reform, it’s now making a concerted effort to improve. Its officers have gotten training in U.S. cities like Santa Fe, El Paso and Chicago.

Still, they have a major public perception problem to combat.

"When we think of police in Mexico, we think of human rights violations and tortured confessions," said Claudia Rodriguez, a former prosecutor and now director of the state police academy in Chihuahua.  "Our job is to replace that image with one of a well-trained, professional cop."

The school mandates courses on human rights for its cadets, some with a special focus on women and the LGBT community. They’re working on perfecting basic skills like shooting a gun and handcuffing a suspect. Cadets are also trained on how to take the evidence they gather in the field and present it in court, something they weren’t expected to do before.

“The work we do makes a big difference in whether an innocent person ends up in jail or a guilty person goes free,” said forensics officer Miguel Wilchis de la Vega.

It helps that they have the right tools. Wilchis de la Vega said technicians in the morgue used to cut open cadavers with steak knives and handsaws; now they have specialized instruments. Chihuahua has two in-state DNA identification labs, whereas 15 years ago it had none.

Working cops, some with only a 12th grade education, also have the chance to go back to school and get a college degree.

"The change is enormous," Rodriguez said. "It fills me with pride now to see an officer defend himself in court, able to stand by his work and show he has nothing to hide. "

The pride that comes with a job well done is palpable among the officers interviewed for this story. It’s a pride that experts like David Shirk say will make them less likely to succumb to political pressure or organized crime— a serious problem which to this day continues to inhibit justice in Mexico, even under the new system.

“We have to keep in mind that this is a long-term game," said Shirk. "It will be at least another decade, maybe two decades before we see some of its effects fully come to bloom.”

Aaron Ramos, a state police commander in Chihuahua who’s survived two attempts on his life, agrees there’s hope in the next generation.

"What gives me the greatest pride," he said, "is when my nine-year-old son asks me to visit his school wearing my police uniform."