Politics Interferes With Justice In Mexico

Politics Interferes With Justice In Mexico 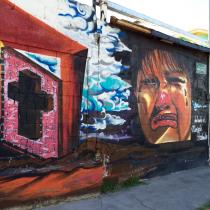 Mónica Ortiz Uribe
A mural in Ciudad Juárez dedicated to Marisela Escobedo who was murdered while protesting the unresolved murder of her daughter Rubi Frayre.

CIUDAD JUAREZ, Mexico — Catalina Ochoa Contreras was one of three judges stripped of their positions months after acquitting a man of the murder of his 16-year-old girlfriend. The drama that unfolded after their ruling six years ago became a national scandal that shows how political influence in Mexico can threaten judicial independence.

Ochoa and her fellow judges presided over criminal court in the northern border state of Chihuahua, which pioneered a new system of justice that’s opening up trials to the public nationwide.

The trouble began in the spring of 2010 when Ochoa read the verdict before a crowded courtroom in Ciudad Juárez. The man they acquitted was Sergio Barraza Bocanegra, accused of killing Rubi Frayre two years earlier after finding her with another man.

Marisela Escobedo, Rubi’s mother, was convinced of Barraza’s guilt. When she heard the judges’ decision, Escobedo stood up from her seat at the prosecutor’s table and began to scream. She staggered out of the courtroom in a fit of sorrow and rage captured by news cameras and televised nationally.

In a recent interview, Ochoa explained why she and the other judges absolved Barraza. In Mexico, a judge or panel of judges decides the final outcome of the case, not a jury.

"Lots of people think he confessed to the murder," Ochoa said. "He did not confess."

At least not as required under Mexico’s new legal standards. Witnesses at the trial, including a local cop, testified that Barraza told them he had killed Rubi but gave conflicting accounts about how he did it. Prosecutors didn't have any other evidence to back up those claims. Medical examiners couldn't determine a cause of death because all that was left of Rubi were charred bones found scattered in a pigsty.

"The prosecution never proved how Rubi died," Ochoa said. "It's their duty to show when, where and how."

Even more frustrating was that, at the end of the trial, Barraza made a vague apology before the entire courtroom. But he never said what he was apologizing for.

"An apology is not the same as a confession," Ochoa said.

Mexico is fast approaching a June deadline to complete implementation of a new system of justice approved by congress in 2008. The new system holds investigators to a higher standard by requiring physical and scientific evidence, not just hearsay. It's designed to provide more protections for people accused of a crime. In the old system, confessions forced by torture were commonplace, especially in high-profile cases.

Nationwide, police are mostly unprepared to meet that higher standard of proof. Rubi’s case exposed how that lack of preparation can have disastrous consequences.

Days after the verdict, Marisela Escobedo took to the streets to protest before news cameras. Once she marched naked wearing only a plastic banner bearing her daughter’s picture. Then she painted her face like a clown with eyeliner teardrops and told reporters her case was a sad joke.

Escobedo publicly blamed her misfortune on the three judges.

“If the prosecution does not give the judge the necessary elements to condemn, the judge cannot invent them,” said Enrique Díaz Aranda, a Mexican law professor who’s studied Rubi’s case at length. “But by pronouncing the final resolution the judge becomes the face of a trial before the public.”

A national outcry erupted as a result of Escobedo’s protests, which happened two months before Chihuahua would elect a new governor. The scandal put political leaders on edge.

"They condemned a man on pure suspicion and unjust interpretations," he said.

Roberto Siqueiros, a judge who sat on that appeals court, denied any outside interference in their decision.

“Individually each bit of evidence might seem insufficient," Siqueiros said. "But all together it left us no doubt that the accused man was responsible.”

Later that year, Escobedo herself was murdered while protesting outside the governor’s palace in Chihuahua. Police had yet to rearrest Sergio Barraza, who went free after the first trial. Many, including the newly elected governor Cesar Duarte, assumed Barraza killed Escobedo.

The day after Escobedo’s murder Duarte went on national news to say he would ask the state legislature to remove the three judges who acquitted Barraza. Shortly after, Ochoa said they got a call from the head of the state supreme court saying he couldn’t protect the judges from the governor’s actions. Ochoa was shocked.

"What this showed was a tremendous submission of the judiciary toward the executive," Ochoa said.

In the end, the three judges chose to resign under pressure. They struggled to find an attorney willing to represent them. They even considered seeking asylum in the U.S.

“Even if we had prevailed and kept our jobs we had no guarantee that our lives would’ve gone on undisturbed,” Ochoa said.  “The enemy we faced was huge and we had our families to think about.”

Oscar Maynez, a Mexican criminologist who follows politics, said this is business as usual.

"We have a system that promotes and rewards people who obey without questioning the political motivation of any investigation," he said. "And if you show independence and honesty the system will throw you out."

It’s a mafia-like alliance which allows Mexico’s political elite to retain power and control at the cost of innocent people, Maynez said.

Last year, the sons of both the Chihuahua state attorney general and the Juárez district attorney were appointed as interim judges in Juárez’s criminal court. According to Mexican media, the attorney general’s son is 25 years old with just two years of experience as a legal clerk.

The appointments have angered people in the legal community who aren’t convinced the new judges will be impartial before state investigators. They declined to be named in this story for fear of reprisal.

Maynez said examples like this are common, despite the new judicial system.

“You cannot have a functioning judicial system without independence and autonomy,” he said. “Without it, rule of law in Mexico will be a facade.”