The Costs Behind A Migrant Crisis: Central American Asylum-Seekers Surge In Yuma

The Costs Behind A Migrant Crisis: Central American Asylum-Seekers Surge In Yuma 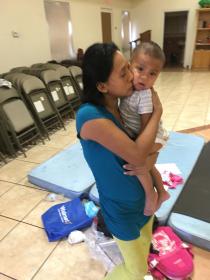 Michel Marizco
Beatriz Escalante holds her son at the Yuma church shelter where she'll stay the night after crossing into the U.S. to seek asylum. 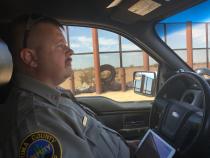 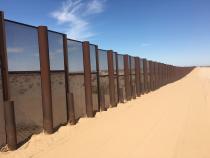 Michel Marizco
The border fence runs about $6.5 million per mile. It's worked to staunch the flow of illegal entries by Mexicans but now Yuma is seeing a rise in Central Americans crossing this fence in search of asylum.

Refugees from Central America are pouring into the United States, a trend from 2014 that seems to be growing along the U.S.-Mexico border again this year. Many of them are children, sent on the long journey alone.

The Border Patrol, immigration courts and refugee workers were overwhelmed in 2014. So how will they handle the influx this time around?

Fronteras Desk correspondents traveled throughout Central America and the United States to look at how the U.S. is managing the flow of refugees. Our five part series, “The Costs Behind a Migrant Crisis” begins in normally quiet Yuma, Ariz., where asylum seekers have been arriving in record numbers.

Yuma County Sheriff Captain Eben Bratcher revs through the soft sands that threaten to swallow his four-wheel-drive truck along the Mexican border. It’s a region where migrant traffic dropped to a lull as quiet as the haunting desert dunes but now is picking up again.

The Yuma Sector is a 126-mile stretch of U.S.-Mexico border that evolved from rusting strands of barbed wire sprawling over white sand dunes into a feat of complicated engineering. It now ranges from steel vehicle barriers along the Colorado River where Mexico, Arizona and California meet, to a miles-long cage of tightly woven steel screen monitored by enormous lights and cameras. Then there's the high wall of steel screen that runs east of Yuma into the desert. All at a cost of about $6.5 million per mile.

Despite this massive, steel 'Keep Out' sign, crossings persist. The tales of those attempts scattered in the northbound footprints, the crawlspaces dug beneath the massive security screens, the cracked water bottles and torn garments of clothing left to bake in the hot sun and a splintered wooden ladder lying on the desert floor on Mexico’s side of the wall.

“We are on the border at approximately Avenue 7E in Yuma County," Bratcher says. "Here at the fence, which is about a 12-foot high wire-mesh fence with vehicle bollards interspaced, you can see just on the other side a Mexican highway and a checkpoint. We’re driving along and we spotted what appears to be a homemade ladder. Suspiciously about as long as the fence is high."

The build-up led to a 90 percent drop in unauthorized crossings of Mexican nationals but there’s been a noticeable uptick, with people trying to cross the border and trying to get caught.

"They’re not what you would consider a typical border crosser. Many of these people are from other nations, other than Mexico. Central America, Chinese, Romanians are a big one right now, and so that’s kind of a change in what we’ve come to expect here," Bratcher says.

In 2014, Central Americans flooded the U.S., mostly at the Texas border. By April that year, some 28,000 lone children were among them. That number dropped by half last year. But this year, the surge is already back to 2014 levels with more than 27,000 children.

CBP officials declined an interview and attribute the growth to seasonal trends. But in February, CBP commissioner Gil Kerlikowske asked the House Appropriations Committee for enough funding to manage an expected 75,000 children at the border, about the same number the agency saw in 2014.

"Along the Southwest border, we monitor and respond to the flow of unaccompanied children and families. The numbers in fiscal year '15 declined from their spike in '14 but we did see an increase in the numbers this past Fall and we remain concerned about seasonal increases this year and in fiscal year 2017," Kerlikowske told Congress.

Two Immigration and Customs agents help a pair of women with children off a government van and into a Yuma church.

Marisol asked that we not use her full name. She fled Honduras in April after two uncles were murdered. She followed a route she was told about that brought her to Yuma.

She tied her four year old son to her back in a makeshift sling, then climbed over the first of 12-foot high security screens, dropped into the U.S. and surrendered.

Melanie Nelson is with Yuma County Interfaith. She says about 25 mothers are now dropped off every week.

“If they’ve gotten here, they’ve made it. This is the easiest part of the trip where there are bus drivers that are [able] to protect them much more so than at any other time on their trip,” she says as she walked into the church's small kitchen to show the recent arrivals where they'll be eating tonight.

The other woman, Beatriz Escalante, hitch-hiked here from Guatemala. She also surrendered after climing the wall.

"For my child, because there's no work [in Guatemala] and here they can help me," she says in Spanish.

Her journey isn't over yet— she has a Greyhound bus ticket and an immigration court date ahead of her in Chicago. But for now, she sits in the grass by a water fountain with her toddler in one arm and waits.

Read more from our five-part series: The Costs Behind a Migrant Crisis