America's Auto Rejects Are Revived And Resold In Mexico

America's Auto Rejects Are Revived And Resold In Mexico 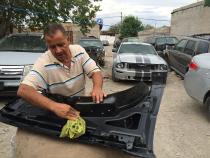 Mónica Ortiz Uribe
A worker at a body shop in Juárez cleans a fender that he'll install on a used truck imported from the U.S. 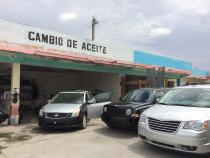 Mónica Ortiz Uribe
Used cars purchased in the U.S. and imported to Mexico are fixed and resold at small lots like this one in Ciudad Juárez 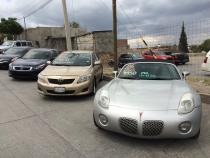 Mónica Ortiz Uribe
Used cars imported from the U.S. are resold and given a second life in Mexico. 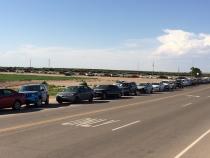 Mónica Ortiz Uribe
Hundreds of used cars wait to be imported into Mexico at a border crossing outside El Paso.

Mexico is making it harder to import used cars from the U.S., angering hundreds of importers along the border whose livelihoods depend the revival and resale of America's four-wheeled rejects.

On a recent morning, a sorry parade of banged up cars idled bumper to bumper near a remote border crossing outside El Paso. Hundreds of them lined up farther than the eye could see. Some had smashed windshields and missing headlights, others had dented hoods held shut by bungie cords. All were waiting to cross into Mexico.

He and other importers said Mexican customs agents abruptly reduced their hours and the number of cars they let through beginning in mid-June. This move has stalled an entire economic sector that's long thrived across the border. In the last decade Mexico received more than 7 million used cars from the U.S.

The backlog of these clunkers at ports of entry in California and Texas has sparked chaos. Last month in Ciudad Juárez an angry group of import salesmen blocked commercial traffic coming into Mexico for several hours. At a border crossing south of San Diego, the Tijuana Chamber of Commerce counted as many as 4,000 cars waiting to be imported.

"Customs is strangling commerce at the border for arbitrary reasons," said Eloisa Talavera, a Congresswoman from Baja California.

The head of Mexico's customs agency was quoted in Mexico's Universal newspaper this week saying that the agency was cracking down on illegal imports— cars with values that are deliberately underestimated to evade taxes or cars with fake emissions reports.

The Fronteras Desk reached out multiple times to Mexican customs but didn't get a response as to why the agency had reduced its hours and number of imports at the border, a move that's negatively impacted those who do business legally.

"These two industries must learn to coexist," says Talavera.

While new car sales have remained relatively stagnant in Mexico over the last decade, auto production has soared in recent years. Today Mexico is Latin America's number one auto exporter. Almost every major brand has a factory there, including Ford, Nissan and soon BMW. In the last five years Mexico exported 14 million cars, mostly to the U.S.

Eduardo Solis, president of Mexico's Auto Manufacturer's Association, said the only pressure they're putting on Mexican authorities is to go after illegal car imports.

"Too much trash from the U.S. ends up on our streets," Solis said. "If a vehicle isn't fit to be driven in the U.S., it shouldn't be allowed on Mexico's streets."

At a neighborhood body shop in Juárez one recent afternoon, a worker repainted an imported Chevy Silverado cherry red. Other cars in the shop still had registration stickers from Minnesota, New Jersey and Massachusetts. One even had a bumper sticker for ex-presidential candidate Ben Carson.

Juan Flores, a second generation salesman, has been selling U.S. imports for 20 years. He said they make car ownership a reality for low-wage Mexicans who don't have access to credit. But at the moment business is bad. Like other import salesman, Flores is paid for the cars in U.S. dollars, and right now the Mexican peso is weak.

His used car shop is among dozens that line both sides of a major street in Juárez. Last week a delegation of auto importers met with officials in Mexico City to try to resolve the situation at the border. In the coming months they hope to help legislators craft new laws that will better regulate the flow of used cars coming from the U.S.