Out Of Room On Arizona's Border 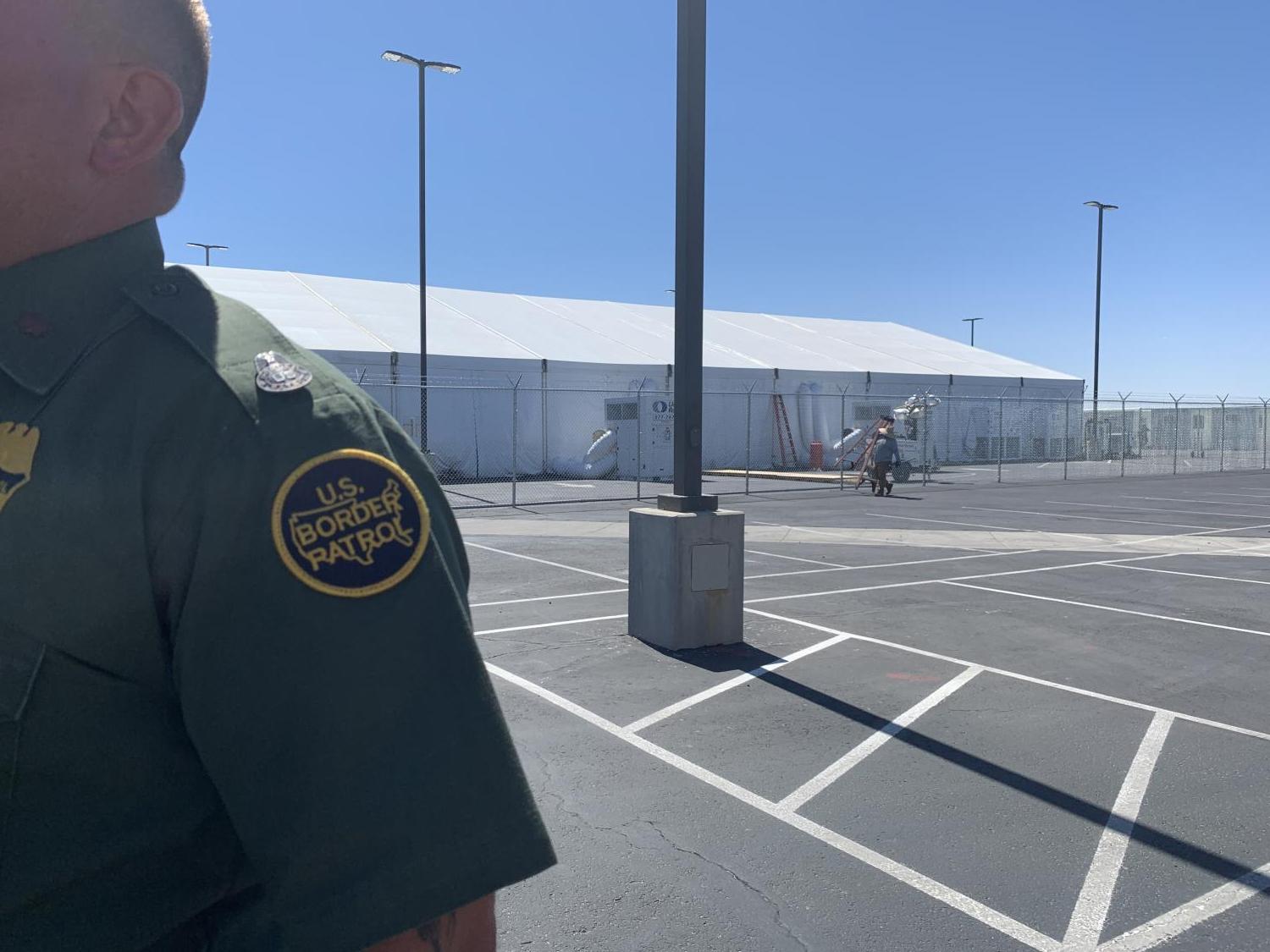 In late June, the Border Patrol spent $15 million to turn a parking lot on its vast Yuma Sector headquarters into a gleaming white tent compound with equipment so new even the mop buckets gleamed untouched. 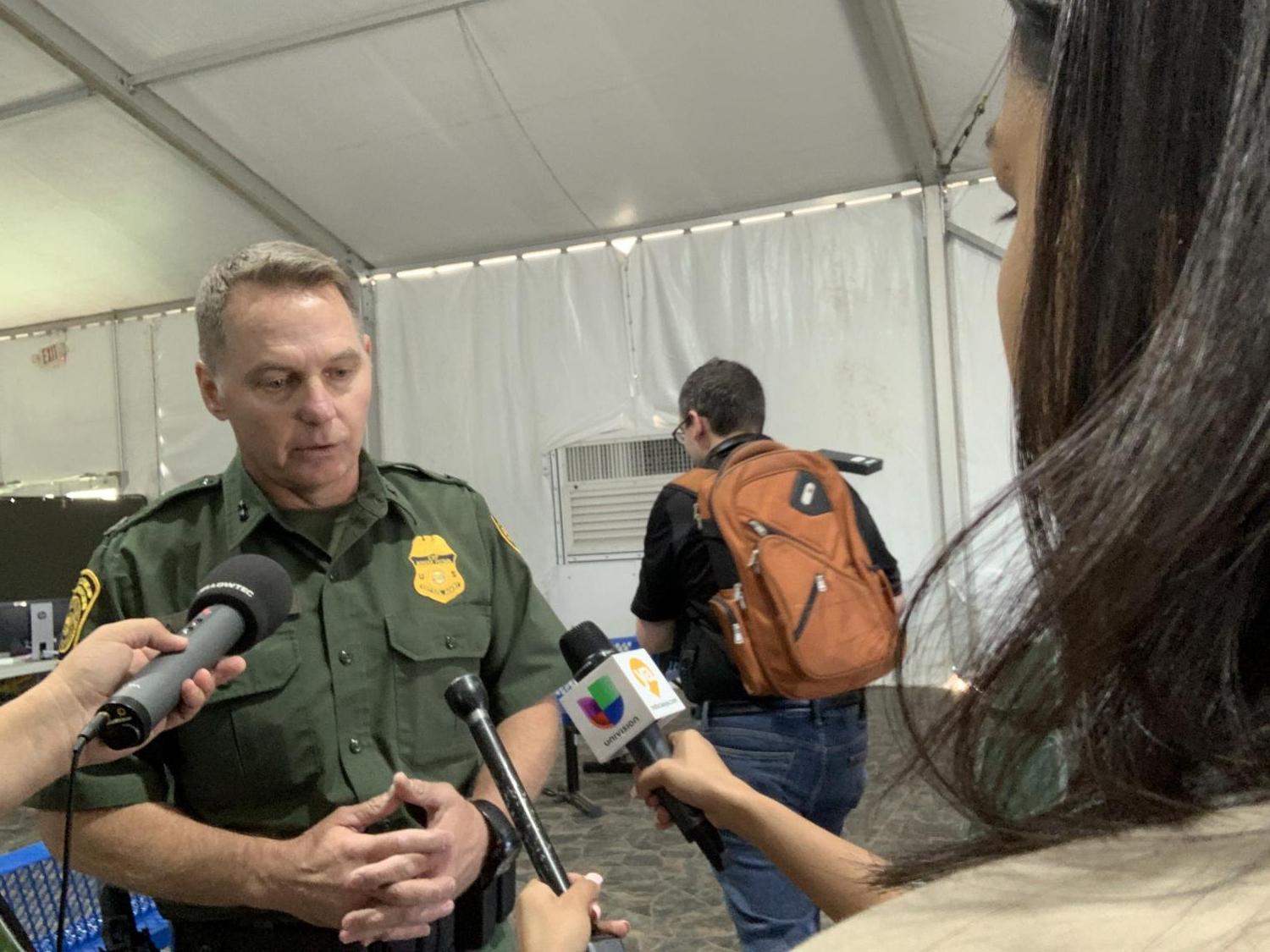 Michel Marizco/KJZZ
Border Patrol Yuma Sector chief Anthony Porvaznik says customs agents at the ports have no choice but to meter asylum seekers at the port.

With temperatures topping 110 degrees, massive air conditioners loudly blast 60-degree air through the tents to cool them as the agency awaits the first group of migrants.

"Depending on the amount of people that are in here, right, it’s going to depend on how hard the system’s going to work," said Yuma Sector spokesman Desi DeLeon.

He shows the compound’s breakdown in a set of walking tours to news reporters, local government officials and nonprofit organization workers. There are tents for sleeping, new cots stacked against a wall, where migrants will be checked for immigration backgrounds and fed.

There are a provided three meals a day, including breakfast sandwiches and fruit for breakfast.

"The cold meal is a turkey sandwich, chips, fruit, and some kind of juice," for lunch. A similar hot meal for dinner and asylum seekers will also receive snacks.

Outside, workers use a forklift to maneuver a washing machine into another tent. 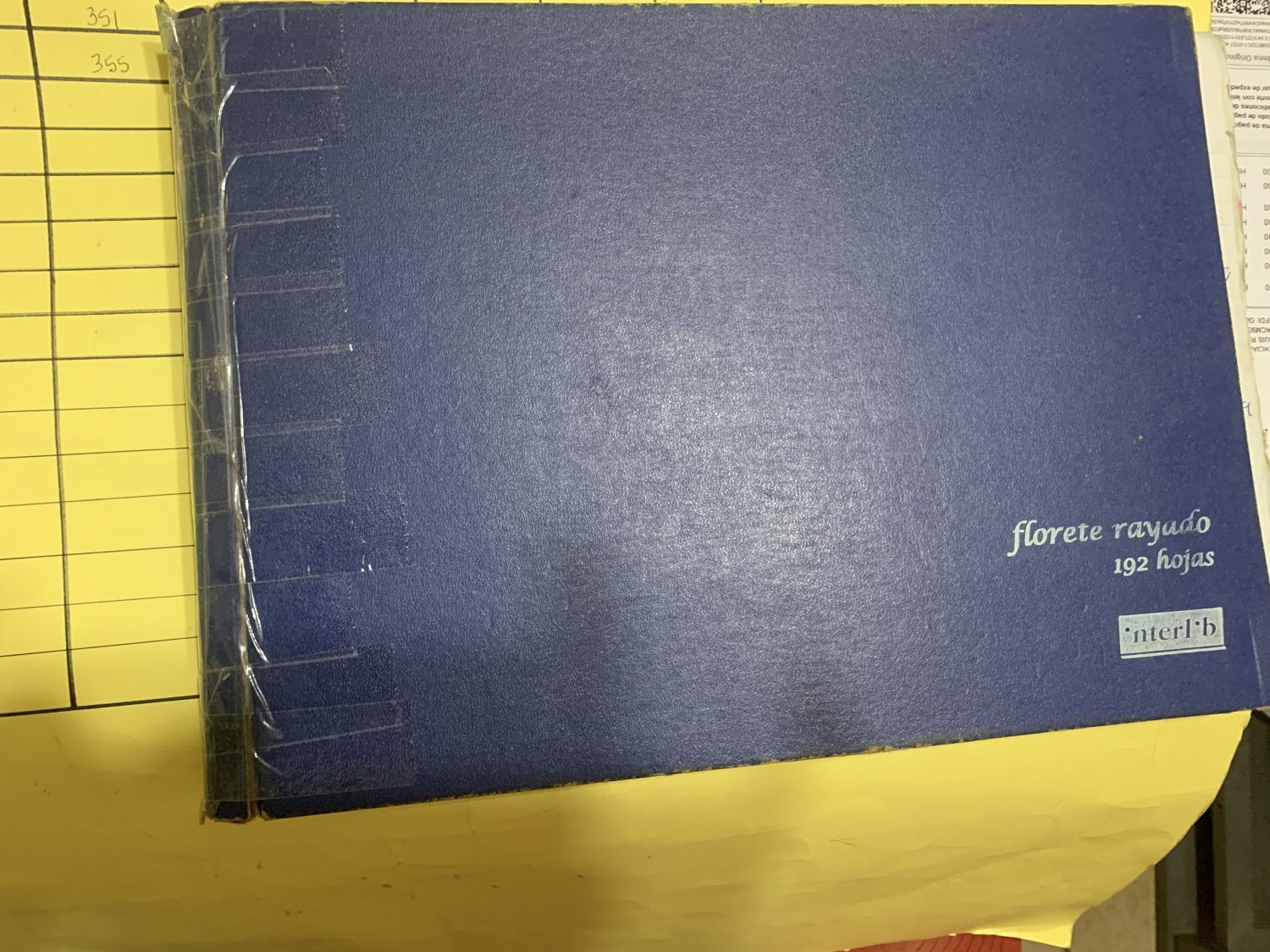 Michel Marizco/KJZZ
The official registry relied upon by both countries of who is coming up to Yuma to seek asylum is this taped-together book.

"If they want it back, they’ll get their clothes back. But point is we’re washing their clothes, providing something that’s available to all of us, that we would like to have as human beings," DeLeon said.

"The facility is designed to hold 500 family members and children traveling alone, and people will stay for up to 3 days. Apprehensions slowed some in June but Yuma continues to be the third busiest sector along the southwest border. This new facility went up as the Border Patrol was slammed by allegations it mistreated children at its Clint, Texas facility. In fact, Yuma Sector officials said they would answer no questions locally about the situation in Clint.

Then the U.S. government expanded its policy of making asylum seekers wait out their claims across from Yuma in Mexico. It’s a policy deemed unsafe for people as violence hopscotches along Mexico’s border cities. Some worry Central Americans will be targeted while they wait. Customs and Border Protection has been criticized for bottlenecking asylum seekers at the border already, a process called metering. 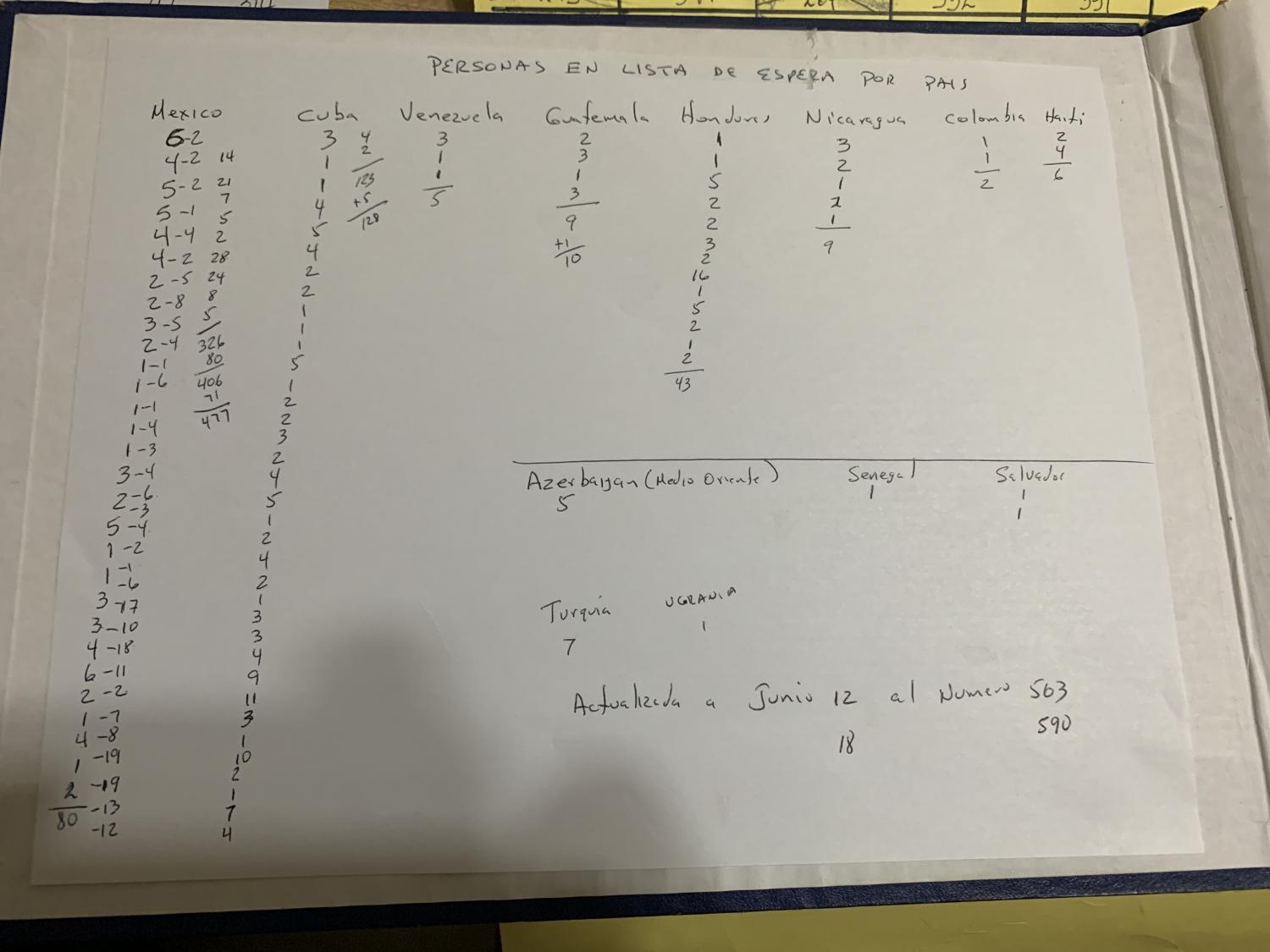 Michel Marizco/KJZZ
The official registry of who is waiting in Mexico to cross to seek asylum in Yuma. Officials locally worry this number will increase once those seeking asylum are sent back to Mexico to wait.

"I think the ports of entry have to do some metering because they do have their job, they’re responsible for legitimate trade and travel. They only have so many to do the job, so they can only process so many people that are coming in to claim asylum or credible fear," he said.

Across the border in San Luis Rio Colorado, Martin Salgado plucks an old blue book sitting askew on a shelf and held together with scotch tape where he and his staff at the Casa de Migrantes painstakingly note the names of new arrivals trying to head north. It’s the only official record either country has of who is trying to cross to ask for asylum here.

The people in it are predominantly from Mexico but also, "Venezuela, Guatemala, Nicaragua, Colombia, Haiti, Azerbaijan, Senegal, Salvador, Turquia, Cameroon," he read from the list.

His shelter was intended for deportees to stay for a short while, not for asylum seekers expecting to wait for months. 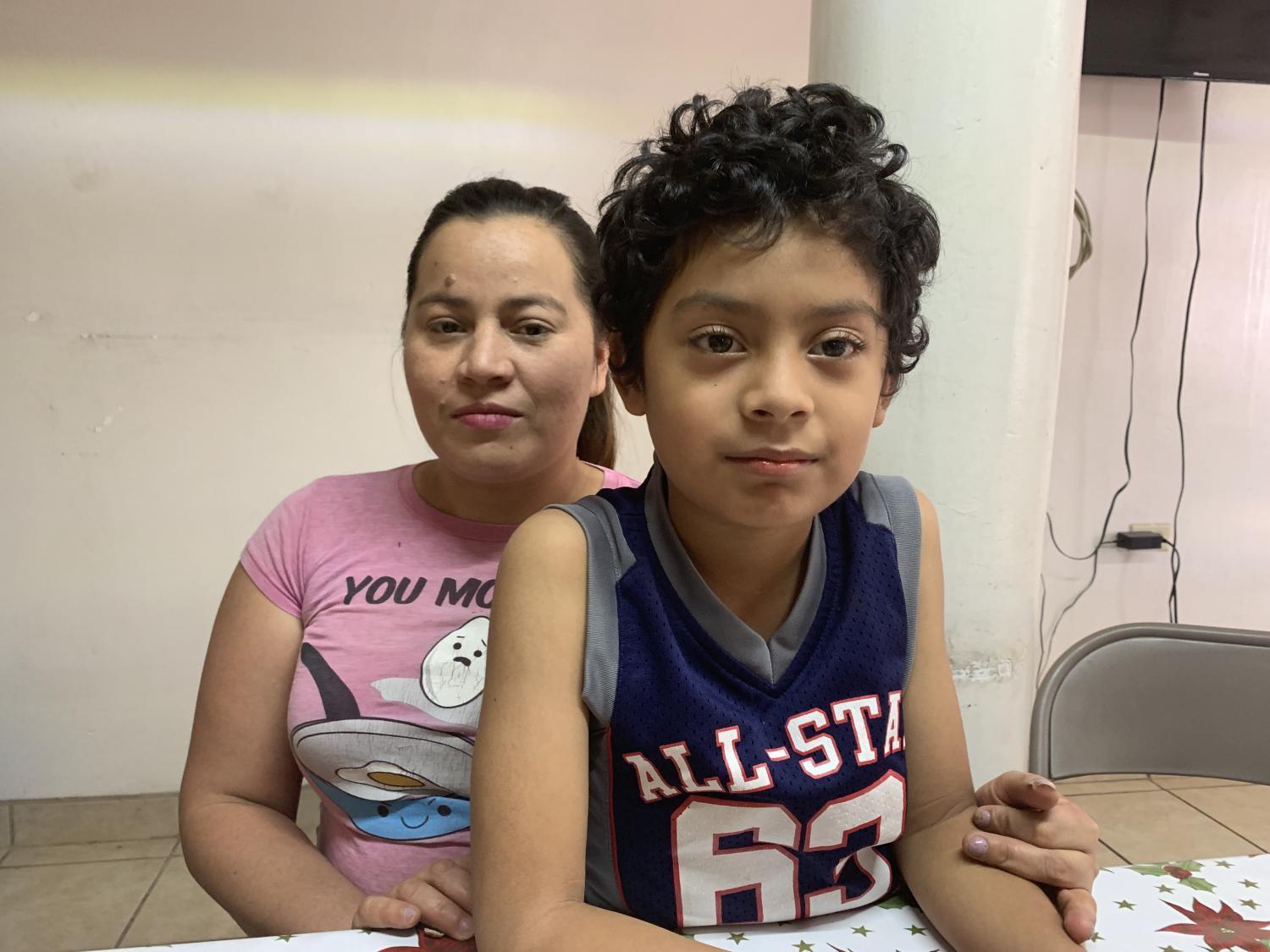 Michel Marizco/KJZZ
Irles Vega and her son wait for their number to be called to approach US authorities to seek asylum in the U.S.

"Pues primero a dios Estados Unidos," says Irles Vega, sitting at a picnic table sorting beans for upcoming dinners while holding her son. She hopes to God to arrive to the U.S. But she and her son have already waited in Mexico two months just to ask for asylum, the result of that metering. And they may return here under the so-called Migrant Protection Protocols to wait even longer.

Salgado worries. Temperatures are rising in the desert and there’s no room left here.

Neither Yuma nor its neighboring Mexican town can handle a bigger bottleneck.

Homeland Security beefed up infrastructure in Arizona but the health concerns it sought to avoid in the U-S now fall on Salgado and this city to manage.