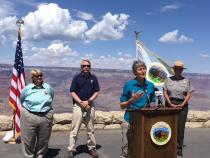 U.S. Interior Secretary Sally Jewell wrapped up her visit to the Southwest at the Grand Canyon on Tuesday.

Secretary Jewell talked with Grand Canyon employees then reporters about “moving past” a culture of sexual harassment.

According to a report by the Office of Inspector General released in January, the park’s river district employees demanded sex from female coworkers and punished those who refused. Jewell called the 15 years of often ignored harassment reports “horrific” and a “failure in leadership.”

So the park service hired a new Grand Canyon superintendent. Christine Lehnertz is the first woman to ever get the gig.

In addition, Jewell said they talked to other federal agencies to find out what they did about the issue.

“We’re trying to understand why it occurs and what needs to be done,” Jewell said. “Some of those things we have learned is consistency in taking action, making sure that there’s a safe place for people to go that is not in the chain of command, that we keep good data.”

National Park Service Director Jonathan Jarvis told reporters a survey will go out to park service employees this fall to assess the prevalence of the problem.

“We are not looking at this as just a Grand Canyon isolated incident but something that could very well be a part of the entire National Park Service as well,” Jarvis said.

The agency is also setting up a hotline for employees worried about talking to their supervisors.