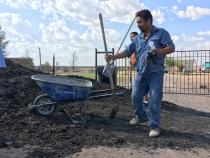 (Photo by Mónica Ortiz Uribe- KJZZ)
Ruben Lugo of Vado, New Mexico prepares to scoop recycled roof shingles into a wheelbarrow to lay on a dirt road in his community. 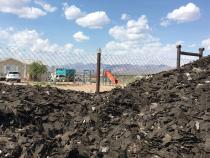 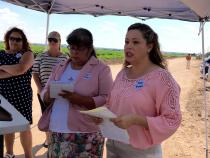 (Photo by Mónica Ortiz Uribe- KJZZ)
Sandra Ochoa (right) speaks to local press in Spanish while Armida Hernandez translates beside her. Behind them Tere Zamora (left) and Brenda Zamora (right) both residents of Vado, New Mexico.

VADO, New Mexico — Three dirt roads in this rural community in southern New Mexico are about to get a makeover after a years-long struggle by locals to call attention to their deplorable condition.

The potholes will soon be filled with recycled roof shingles. A company in nearby El Paso is donating 60 tons the material and delivering it by the truckload this week. The shingles will serve as temporary pavement over roads like Cebolla Lane, a principle street named after the onions widely grown in this region and picked by some of the immigrant families who live in Vado.

"It's exciting," said Gloria Lugo, who moved here from northern Mexico 25 years ago.

Vado is recognized by the U.S. government as a colonia — one of thousands of low income border communities that lack access to basic infrastructure, including paved roads.

"My kids had to put plastic bags on their feet when they walked to school to keep the mud off their shoes," Lugo said.

In the summer rains, the dirt road in front of her mobile home often becomes impassable.

The roof shingles will give residents some relief. Dirt roads can trigger asthma attacks and make access for emergency vehicles difficult. One man died of a heart attack last year as first responders struggled to navigate the rough roads.

"Community members have been organizing around this issue for a long time, years," said community organizer Johana Bencomo.

Many colonias were subdivided decades ago in a way that would be illegal today. The roads are located on private property and state law prohibits the use of public funds to improve them. Vado residents continue to push elected officials to come up with permanent solutions to their infrastructure needs.