After Years Apart, Reunited Families Get To Hug Across The US-Mexico Border

After Years Apart, Reunited Families Get To Hug Across The US-Mexico Border 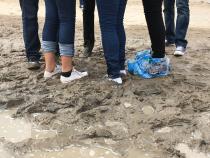 Mónica Ortiz Uribe
Immigrant families sloshed through a muddy trickle of the Rio Grande to embrace at the U.S.-Mexico border between El Paso and Ciudad Juárez. 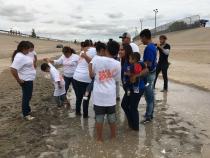 Mónica Ortiz Uribe
Families separated by their immigration status had a chance to reunite on Wednesday at a special event organized by immigrant advocates and supervised by the U.S. Border Patrol. 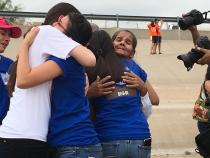 Families separated by their immigration status sloshed through a muddy trickle of the Rio Grande on Wednesday to embrace at the border between the United States and Mexico.

Their reunion was a momentary truce organized by immigrant advocates and supervised by the Border Patrol.

Families who came from the United States wore blue T-shirts and their relatives from Mexico wore white T-shirts.

They met in the middle of a concrete canal between the border cities of El Paso and Ciudad Juárez.

Francisco Luevano squeezed his mother to his chest for the first time in 15 years. Luevano is an undocumented hotel maintenance worker who lives in Las Cruces, New Mexico. His mother traveled 700 miles from central Mexico to see him for a fleeting three minutes.

"It feels like I've been reborn," Luevano said, "like when I was a child in my mother's arms."

Nearby tears of joy streamed down the faces of grandmas cradling newborns and husbands embracing wives. The scene replayed itself over and over again until close to 100 families had reunited over the course of two hours.

Fernando Garcia, one of the lead organizers of the event, said the outpouring of love was a form of protest to what he calls inhumane policies against undocumented immigrants.

"When you see the rhetoric nationally, it seems like the only promises are more deportation and more separation and more walls," he said.

Garcia is the executive director of the Border Network For Human Rights, which over the years has worked closely with the Border Patrol to improve community relations.

Ramiro Cordero, a spokesman for the Border Patrol, said Wednesday's event was organized two months in advance and participating families were on the "honor system."

"The Border Network for Human Rights did a great job in… informing their communities on either side of what they could and could not do," Cordero said. "If we do encounter somebody coming across the border that happens to slip into the community then we can follow that individual and make an arrest."

Similar family reunions have been organized along the border between Tijuana and San Diego.