Documenting The Dead On The Arizona Border: Lonely Remains Are Matched To Lost Loved Ones

Documenting The Dead On The Arizona Border: Lonely Remains Are Matched To Lost Loved Ones 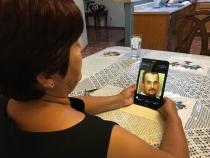 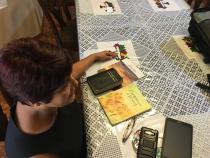 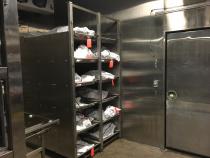 Michel Marizco
The remains of 11 people found in the southern Arizona desert await identification or public interment. Nearly 900 bodies found since 2001 have never been identified. 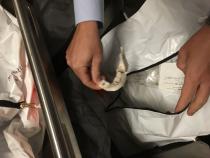 Michel Marizco
Pima County Medical Examiner Dr. Greg Hess holds the lower jawbone of case 15-3103. The remains were found toward the end of last year; the person they once formed has not been identified.

On August 8 of this year, a U.S. Border Patrol agent tracking a group of illegal immigrants from Mexico came upon the lonely remains of what was likely a person who’d crossed the border into the U.S. some time ago. The remains were scattered, incomplete and the person they once comprised, was unidentified, unknown.

It’s an old story in this quiet desert. A slow and and very lonesome death. Smugglers are paid to guide people through trails that slither through green mesquite and palo verde but too often, leave clients behind in the rush to keep moving and avoid detection. Some migrants choose to bypass the enterprising criminal networks and go it alone. But in doing so, they risk the possibility of becoming overwhelmed by the magnitude of a long walk through hard country.

This desert holds bones and it guards their identity like secrets.

The bodies of nearly 900 people remain unidentified in Pima County, the result of years of illegal border crossings that funneled people through the Arizona desert. Now, a new program is underway at the Pima County Medical Examiner in Tucson to use DNA to match those remains to thousands of people who’ve been reported missing.

"We’re here in the cooler. You can see that the remains to the right of the cooler or the north-facing side in these white body bags are generally undocumented border crosser remains. As an example of what we have, we can look over here where we have a number of smaller body bags on a particular tray. The number I’m currently looking at is labeled 15-3103 which means these remains were recovered in 2015, at the end of 2015," said Dr. Greg Hess.

The bag holds a lower jawbone and several smaller bones. Case 15-3103’s brittle yellow specimens will be interred but now forensic anthropologists have a digital ID card, the DNA of the person this lower jawbone belonged to.

Last year, Hess’s staff performed autopsies on 138 people found in the desert. It’s been this way since 2001 in Arizona when the state became the predominant region for illegal border crossings. Since then 2,600 people have been found dead. Of those, nearly 900 remain unidentified. All presumably undocumented migrants and all found within roughly 100 miles of the border.

Camerina Santa Cruz lives in a tidy home in a Tucson neighborhood. She is a Jehovah’s Witness and on this day she's rehearsing a song from the religious studies class she attends at night. She’s a U.S. citizen who arrived here in the 1980s.

She has faith he’s still alive. A mother’s faith, she says.

Kat Rodriguez, Missing Migrant Project Specialist at the Colibrí Center, said, "It's just waiting on the results. So she might have answers. Her son’s been missing almost exactly 3 years and he very much could be one of those 900."

The non-profit has fielded 2,500 calls from people now living in the U.S. who call in to report missing family members.

Rodriguez dialed a woman from Phoenix whose brother went missing in June 2014. "We have all the information that we need from him, we have photos of him. Even a pretty big photo of a tattoo he has," she said. "So basically from here, there’s nobody that’s come through the medical examiner’s that seems to be him."

But the Colibrí Center’s DNA program could end up matching one of the unidentified 900 bodies with the woman’s brother.

"It’s also a way to give families the answer that he’s not here. And sometimes knowing that is also really important," Rodriguez said.

The DNA samplings will be processed throughout the U.S., the first one this Fall in San Francisco.

So for now, Santa Cruz and thousands more family members like her wait, first for a DNA swab and then for the results of those tests to see if any of those many lonely remains belong to their loved one.

You can learn more about the Colibrí Center for Human Rights work at the organization's website.