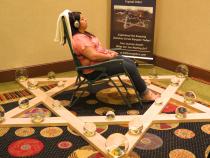 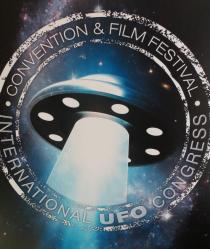 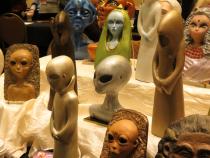 (Jimmy Jenkins/ KJZZ News)
Many UFO believers think aliens have been living among us for centuries.

Have you ever wondered if it was possible that there could be beings out there from another planet that have visited us? It’s not as crazy as you might think. We went to the 24th Annual UFO Congress to talk with some true believers.

Travis Walton has been telling his story for almost 40 years now.

"Nov. 5, 1975, I was in the woods with six other men and we were headed home from a long hard day's work and we spotted an object hovering near the road," Walton said. "I got out and went up to get a closer look and was hit by a blast of energy from the craft that scared my co-workers off. When they came back, I had been taken."

And he means taken... away... by aliens... in a spaceship. Walton wrote a book about his experience that was adapted into a movie called "Fire in The Sky."

The movie largely dramatized Walton’s abduction. He said equally, if not more traumatizing, was the reception his story first got in his hometown of Snowflake, Ariz.

"Now in the movie it might give the impression that the entire town was against us when we came back and told them what happened, but it was actually worse than that," Walton said. "It was like half the town believed and half didn’t and it went right down the middle of a lot of relationships, ya know.”

Walton is telling his story this weekend at the 24th annual UFO Congress in Phoenix. It’s a yearly gathering that brings together people that have reported a UFO encounter and those that study them.

"I think there is a kind of people who want to connect with somebody who shares an experience that otherwise makes us feel set apart," Walton said. "To walk around and know something is real, it does give you a very different perspective."

The conference is not all "X-files" posters, conspiracy theorists and t-shirts with little green men. Veronica Vertes has come to the UFO Congress for five years. She said you would be surprised by the kind of people you run into here.

She said while attitudes are changing, more people need to accept the possibility of life on other planets.

"It bodes well for humanity that there are beings out there that have high technologies that are beneficial and friendly to mankind," Vertes said. "I know it sounds fantastic, but miracles do happen, don’t they."

Walton said while it hurts him that so many have questioned his abduction story for so long, he understands why the government isn’t keen about corroborating his account.

"You know, they may have a point in maintaining secrecy," he said. "The wider public would, uh, many people wouldn’t go to work the next day, you know, it's that kind of a thing. It would be extremely disrupting at this point."

Walton said he takes solace in sharing his story and in the thought that it's not so weird to believe in UFOs anymore.

"The weird person is the person that thinks we are alone," he said.

The UFO Congress continues this weekend through Sunday.