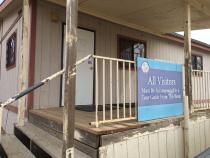 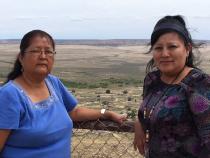 Laurel Morales
Sheril Benson and Meredith Qotswisiwma are authorized to give tours of Hopi's Walpi village. 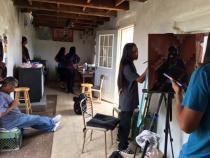 Laurel Morales
Hopi artists are inspired by the views from the ancient Walpi village that sits atop a narrow mesa. 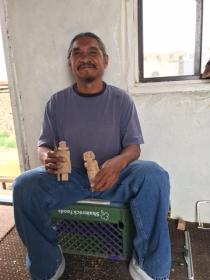 Laurel Morales
Darrell Youvella learned how to carve katsina dolls from his father. 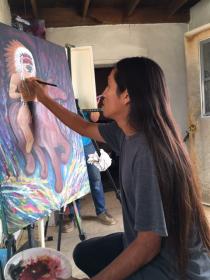 The Hopi Tribe has been split on whether tourism is a good idea. With half the tribe unemployed many have said it’s their best chance at economic development. But some worry inviting tourists to their villages has left them vulnerable to thieves.

Many travelers visiting the Southwest have driven more than a hundred miles from the Grand Canyon to Hopi, the isolated reservation in northeastern Arizona. A sign on First Mesa read: “All visitors must be accompanied by a tour guide from this point.” But many have ignored the sign.

On a recent visit two authorized tour guides Sheril Benson and Meredith Qotswisiwma drove me to the top of a narrow mesa known as Walpi. Ancient stone houses clinged to the top.

Qotswisiwma pointed to two non-native men getting out of their car to take a picture. The road ends just before we got to the ancient village of Walpi. Sheril switched into guide mode and explained no cameras or recording devices were allowed in the village.

We walked past a half dozen tall primitive ladders that take you underground into the kivas where religious ceremonies are held. One must be initiated to be allowed inside. We also passed three men dressed all in black — new security guards.

In recent years a few tribal members desperate for money sold sacred ceremonial items to art collectors who auctioned them off in France. Outsiders have also looted sacred items.

Past the kivas we arrived at an artist’s studio, where recording is allowed.

Darrell Youvella sat on a crate carving a katsina doll. Youvella said the doll, called a roadrunner, was for a child who wants to run fast. Running is a big part of Hopi culture. Some stories and meanings behind the artwork are allowed to be shared like this with outsiders.

“When we’re talking to people we explain to them but we don’t give everything away because our culture is very precious to us right now," said Youvell.

The Hopi is one of the oldest living cultures in documented history. In the 12th century the Hopi people settled atop three mesas. Elders said the Creator chose the isolated land to help them protect their culture. But lately that’s been difficult.

Youvella’s nephew Ronald Lewis Laban painted a Comanche Indian on a red horse. Laban said while artists like himself have survived off the tourist dollar, the tribe is divided.

“Some don’t like it,” Laban said. “Some of them say it’s necessary. And some of them say we have to change and grow from it. It’s always going to be you can’t fight the progression and you have to find a balance.”

Down in the tourism office, former Hopi Chairman Ivan Sidney sat at his desk. He’s now First Mesa’s business manager. He has been trying to grow the tourism economy but in a safe way. As a former police chief, there’s no better man for the job. He’s behind the security guards.

“We need to protect what we have,” Sidney said. “But our elders our leaders know that we have to move along with progress. We can hold both — protect our traditions as well as have progressive ways such as tourism to move on.”

Sidney has taken protecting the sacred seriously. When Sidney was tribal chairman, he visited Washington, D.C. A curator at the Smithsonian took Sidney to see Hopi artifacts in the basement not on display.

“The curator there asked me, because it was obvious I was shocked, he asked me, ‘What do you think?’ It shouldn’t be here needs to be home," said Sidney. "[He asked,] ‘What can we do with it in the meantime?’ Take it out of the cellophane. It’s not breathing! This is in Hopi way a living spiritual being.”

Sidney said the katsinas abroad and those in U.S. museums belong back home on Hopi.

“They’re making money off of it and we’re left here with the crumbs,” Sidney said. “They belong home.”

Sidney wants to build a Hopi cultural center with a museum. He knows if the Hopi don’t develop their economy, there will be few left to carry on the Hopi traditions and way of life.