While The Mexican President Celebrates, Others Demand His Resignation

While The Mexican President Celebrates, Others Demand His Resignation 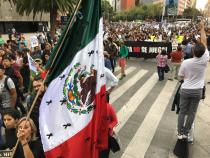 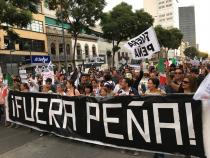 Jorge Valencia
"Peña out!" was the claim of thousands of protesters in downtown Mexico City, demanding the resignation of President Enrique Peña Nieto. 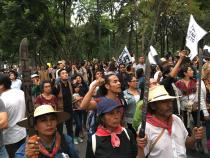 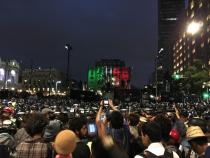 MEXICO CITY — For almost 200 years, Mexicans have celebrated their Independence Day the night of Sept. 15, with the president reenacting the call of the Founding Father of the Nation, Miguel Hidalgo, to fight against tyranny.

The protesters met at the Angel of Independence, the emblematic monument located 2.5 miles from the city’s main square. Protesters expected to arrive at the square and demand Peña Nieto’s resignation when the president appeared on the balcony of the National Palace, but were blocked by the Police.

“Peña out!” were the shouts coming from the crowd.

The call for protest started on social media with the hashtag #RenunciaYa  (#QuitNow), just after Peña Nieto and Donald Trump met in Mexico City last month.

Peña Nieto has faced severe criticism since inviting the U.S. Republican presidential hopeful to Mexico City. Trump notoriously called Mexicans “rapists” and accused them of damaging the United States’ economy. According to a recent poll from Reforma, one of Mexico’s leading newspapers, only two in ten Mexicans approve Peña Nieto’s government.

But the scandals in the Peña Nieto administration also include accusations of corruption, including Mexican media reports that a government contractor gave the president an expensive mansion as a present.

Peña Nieto’s administration has also been criticized by some groups for the reforms implemented by his government, including a restructure in the educational and judicial system, as well as for the raise in the prices of gas and electricity.

In addition, many still question his administration for the unsolved disappearance of 43 students from Ayotzinapa, a small town in the Southern State of Guerrero.

Alejandra Hernández Abascal, one of the protesters, wore black clothes and black shoes, as if she were attending a funeral. She marched, she said, because she’s mourning the murders that have gone without prosecution under Peña Nieto’s watch.

“We definitely can’t take two more years of this government,” Hernández Abascal said. “The whole country is a graveyard full of bodies.”

And while some of the attendees at the Zócalo festivities were Peña Nieto’s supporters and arrived in buses payed by the president’s party, others simply decided to be there to honor the tradition.

Gabriel Fernández traveled 30 hours by bus from Ciudad Juárez. He said his eyes filled with tears when he saw the president give the country’s cry of independence.

And what about the calls for Peña Nieto to resign?

“Okay, there’s a time for everything,” Fernández said. “And this is not a time for politics. This a time for all Mexicans to be together and celebrate independence.”