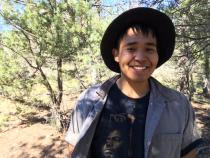 Laurel Morales
Majerle Lister, 22, supported Bernie Sanders before the primary. He’s waiting to see if Hillary Clinton will take a stand on issues important to him like tribal sovereignty, the environment and water. 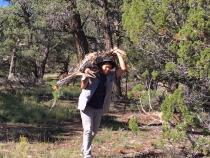 Laurel Morales
Majerle Lister, 22, helps his family haul wood for the matriarch of the family who just got solar power last year but still heats her home with wood. About 15,000 people still live without electricity on the Navajo Nation. 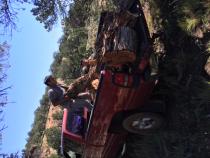 Laurel Morales
Mary Kee tells her grandson Majerle Lister how to stack the wood in the back of the truck. Two truck-loads of wood will last Kee one month.

Majerle Lister is a young Navajo voter who has lived on and off the reservation. There are 22 federally recognized tribes in Arizona including the largest in the country — the Navajo.

As the second largest minority American Indians make up 5 percent of state population. While that doesn’t seem like that much, as a block they’ve been the swing vote in close races. Twenty two-year-old Majerle Lister has been watching the presidential race closely.

“I’ve always been political,” Lister said. “My grandfather was a chapter house president but also a councilman on the Navajo Nation. I used to play at the chapter house meetings. Looking back at it now I’m like oh wow maybe subconsciously I picked it up and wanted to be part of it.”

Majerle graduated from Arizona State University and now he’s a research assistant at the Diné Policy Institute, a research organization. He wants to go into politics and maybe run for president one day, president of Navajo Nation, that is.

“We’re always told to come back get an education and come back,” Lister said. “There’s like that nag more of a pull. I need to go back and do something ...The reality though is there’s no jobs to really come back to. There’s what’s considered a ‘brain drain.’”

Lister is one of lucky ones to have a job on reservation. Half the tribe is unemployed.

On the day I met Lister, he was chopping wood for his Grandma Mary Kee on the east side of the Grand Canyon in a juniper forest on Navajo land. She's a Navajo elder who also has been following the election closely.

I asked her if she’s planning to vote. “Yes,” she said. “I vote all my life for the Democrat.”

Kee, the matriarch of the family, just got solar power last year. But she still relies on a wood stove to heat her home. About 11 percent (15,000 people) of the Navajo people still live without electricity.

Lister took a break to talk with me. Almost the entire family has left the reservation to find work. Lister and his brother were raised on and off the reservation by their single mom. In high school Lister preferred living in Phoenix.

Lister said the candidates rarely talk about Native American issues publicly like water scarcity or energy. Both Clinton and Trump have met with Navajo leaders. Right before the primary Bernie Sanders held a rally on the Navajo Nation. He’s said to be the first presidential candidate to do so. That won over Lister and a lot of his peers.

“A lot of Navajo youth we called him Che Bernie, which means Grandpa Bernie. So I was at that rally in Phoenix,” Lister said.

“Hillary she flipflops it seems like she’s doing it to get votes,” Lister said. “As Secretary Of State, she was very pro fracking. But then as she won against Bernie she adopted she took it to mainly to get Bernie supporters, which is ‘look I’m not fracking anymore’ … It makes me nervous. If I’m going to vote for someone, I want them to be very solid on their positions.”

Lister hopes that Clinton will take a stand on the issues important to him — like the environment, water, jobs, tribal sovereignty and women’s rights.

He said he won’t vote for Trump. And he said he doesn’t know anyone — on or off the Navajo Nation — who will.