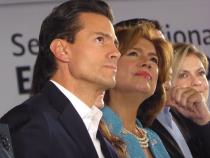 Addressing a conference room packed with students and small business owners, she sought to emphasize Mexico and Latin America’s cultural influence in the U.S., expressing support for collaboration between the  governments of the two countries and business owners on both sides of the border. Seventeen percent of the U.S. population is Hispanic, she noted.

“We're not just a little niche. We're the growth market,” Contreras-Sweet said. “I say, how important for us to connect with the people of Mexico not as minorities but, rather, as the next way to keep our countries strong.”

Contreras-Sweet, who was born in Guadalajara and raised in Los Angeles, spoke to the crowd switching from English to Spanish and back. Her remarks and tour with President Peña Nieto were part of a three-day visit to the Mexican capital to meet with Mexican political and business leaders, a U.S. embassy spokesman said.

For Peña Nieto, the meeting was the first public exchange with a top U.S. official since he received presidential candidate Donald Trump at the presidential palace in late August. The visit from the candidate was widely seen as a humiliation to the country, and Peña Nieto’s top cabinet member, the minister of finance, resigned days later.