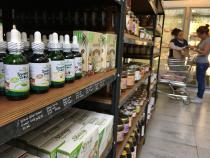 Jorge Valencia
Sweetleaf stevia on the shelf of the Mexico City natural foods chain the Green Corner. The Gilbert-based SweetLeaf is capitalizing on Mexico’s growing demand for natural foods. 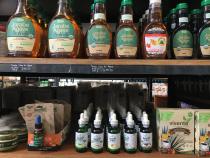 Jorge Valencia
Sweetleaf stevia on the shelf of the Mexico City natural foods chain the Green Corner. The Gilbert-based SweetLeaf is capitalizing on Mexico’s growing demand for natural foods.

In an organic food market in Mexico City called the Green Corner, a clerk recently piled three rows of produce onto a shelf to resemble the Mexican flag: green peppers, white onions and red tomatoes.

Throughout the store, most shelves are similarly patriotic - roughly 80 percent of the food is produced in Mexico. But in one aisle, store manager Nasheli Gutierrez picked up a drop dispenser bottle, filled with a natural, non-sugary sweetener and marveled at it.

“It’s pretty cool, but we can’t find it in Mexico,” Gutierrez said.

The Green Corner buys the drops from a Gilbert-based company called SweetLeaf. The transaction shows how one Arizona company is capitalizing on Mexico’s rapidly growing demand for health food products.

John Pagliaro, president of the annual Mexican Healthy Products Summit in Puerto Vallarta, estimates Mexico’s market for natural foods at more than $10 million per year. Many distributors tell him their sales have doubled annually for several years, he said.

Companies like SweetLeaf see that as a growth opportunity.

Wisdom Natural Brands, the parent company of SweetLeaf, was founded in the 1980s by Gilbert businessman James May, after he sampled sweet leaves brought back by a Peace Corps volunteer from Paraguay.

Wisdom Natural Brands sells teas under some of its brands, and had a major breakthrough for its line of sweeteners in 2008, when the U.S. Food and Drug Administration approved stevia as a "Generally Recognized As Safe" product. SweetLeaf is now distributed by Whole Foods and other national chains.

In 2014, SweetLeaf launched a renewed effort to expand internationally. The company’s products are sold in liquid and powder form in more than 50 stores across Mexico, said Tina Kosumi, who manages international sales for SweetLeaf.

“Mexico is just a natural partner because it’s our neighbor, it’s part of NAFTA, and it just makes sense,” Kosumi said.