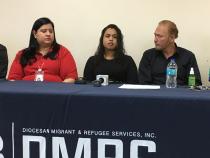 A coalition of attorneys and human rights advocates is calling for federal immigration authorities in El Paso to show more respect for basic human rights and stop deporting immigrants who are eligible for humanitarian parole.

In their second press conference since July, the Borderland Immigration Council, accused the El Paso field office of Immigration Customs and Enforcement (ICE) of carrying out their duties recklessly.

The group highlighted the case of Ricardo Molina, a 35-year-old man was was deported to Mexico this month, as a prime example of "egregious" actions on behalf of ICE.

Molina had been on suicide watch and was deported a day after a doctor recommended he remain in a mental health hospital for at least a week.

His wife, Lupita Zuniga, said ICE didn't notify their attorney about his deportation until after he was gone.

Zuniga is a U.S. citizen caring for the couple's 3-year-old daughter on a minimum wage job.

ICE was unable to provide an official response by deadline.

In a previous statement ICE said the agency prioritizes deportations for people who pose threats to national security and public safety and uses prosecutorial discretion to make decisions on a case-by-case basis.

Zuniga said her husband came to the U.S. illegally as a teenager and had been previously charged with illegal re-entry. She said he did not have a violent criminal record.