With A Brand-New Phoenix Office In Mexico City, Both Sides Of The Border Look For More Business

With A Brand-New Phoenix Office In Mexico City, Both Sides Of The Border Look For More Business 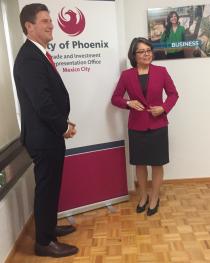 MEXICO CITY - Now that the city of Phoenix has opened a trade office in Mexico City, leaders on both sides of the border are working to strengthen business ties.

On Thursday, Phoenix Mayor Greg Stanton officially inaugurated the office in the south of Mexico City, surrounded by other visitors from the state. Stanton promised that the office will serve everyone interested in doing business with Phoenix, particularly the inhabitants of Arizona’s capital.

Mexico is the top export destination for all four states along the border. More than 40 percent of Arizona exports go to Mexico.

Peter Hayes was one of about a dozen Arizona business leaders checking out the new office. He handles government relations for the Salt River Project.

“With all the business interactions we have going on with Mexico, it’s a very good idea, very smart,” Hayes said.

The committee also met with Mexican business people and members of the Mexican Senate to discuss concerns and areas of opportunity in the economic connection between Mexico and Arizona.

For Cuevas, the reality in the relationship between Arizona and Mexico goes beyond political rhetoric, as people from both sides of the border have a daily exchange of goods, services and even friendship.