In Mexico, An Emotional Response To America's President Elect

In Mexico, An Emotional Response To America's President Elect 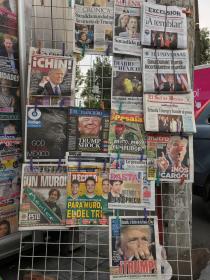 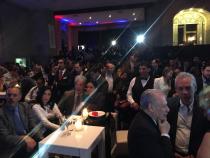 Rodrigo Cervantes
Hundreds gathered at the University Club of Mexico City and ate hamburgers, hot dogs and fries as they watched the American presidential election results.

Mexico watched the elections perhaps more closely than any other country, and many reacted emotionally.

People in a handful of watch parties cried or argued with each other as results came in.

Leonardo Núñez González, a columnist for the Mexico City newspaper La Razon, was in one of those crowds.

"Well, we are Mexicans, but we care because the U.S. is our first partner in commerce," he said.

Núñez said people also care because the president elect centered his campaign, in part, around building a physical and tax wall between the two countries.

But not everybody is so pessimistic about Donald Trump.

"Yeah, he’s got problems," said Eddie Varon Levy a lawyer with offices in Mexico City and Los Angeles. "But there are many people that are close to him that are friends of Mexico."

Varon reminded his friends that Trump campaigned on other issues, such as healthcare.

Larry Rubin, who is Mexican American and president of Mexico's chapter of the Republican Party, said he expects Trump the president will be different than Trump the candidate.

“I do believe that Mexico has an opportunity as of today to start cementing a new relationship with now President Trump," Rubin said.