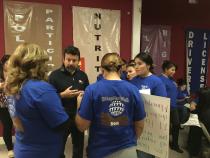 Mónica Ortiz Uribe
Fernando Garcia, head of the Border Network for Human Rights in El Paso, meets with immigrant families to discuss the outcome of the 2016 election.

Nationwide, Latinos are analyzing the largely unexpected impact of their record turnout in the 2016 presidential election.

Fernando Garcia has spent 18 years working with immigrant families who now face possible deportation under a Trump presidency. Like most of the country, he was shocked by the final election results.

"We were not prepared for this result," Garcia said. "We never thought that racism was an acceptable value, that calling Mexicans rapists and criminals was the basis for a successful political platform."

At the polls on Tuesday many Latinos in El Paso said Donald Trump's remarks motivated them to vote against him.

Nationwide, turnout among Latinos reached historic highs, but the outcome was mixed.

"One thing it will force demographers and political scientists to look at is that the Latino community is not one homogenous group," said Richard Pineda, a communications professor at the University of Texas at El Paso.