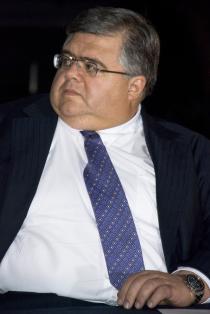 WikiCommons
Agustín Carstens, governor of the Central Bank of Mexico.

Mexico City — This year has not been a good one for global finances. Stock markets outside of the U.S. have been continuously fluctuating, and currencies from emerging economies have been losing its value against the dollar.

But the most recent wave of negative effects on global markets comes from the uncertainty brought by the U.S. elections.

Arizona’s No. 1 business ally is not an exception: Mexico is one of the countries that has been struggling more.

Mexico has been trying to control the peso’s depreciation and the inflation, but these efforts are no longer enough. That’s why the Central Bank of Mexico is urging the government to act fast and look beyond north.

Mexico’s Central Bank just published its quarterly report and lowered its estimates for the Mexican economy’s growth, while expecting a rise in domestic prices.

The governor of the Central Bank of Mexico, Agustín Carstens, says that they want to avoid as much as possible a negative effect on the commercial relationship with the U.S., Mexico’s main business partner.

But he also says that Mexico needs to accelerate its own growth with less dependency from its neighbor.

That’s why the Central Bank of Mexico is urging the Mexican government to accelerate the the country’s reforms and diversify the international markets where it participates.