For Mexicans, Turkey Is Becoming More Than 'The Mole Bird' 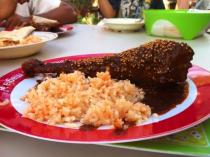 (WikiCommons)
Turkey, known in Mexico as "guajolote" or "pavo," has been traditionally prepared in Mexico with mole sauce for special celebrations. 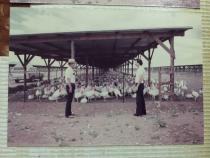 Courtesy of Escosa
In this 1986 photo, Richard Parson (left), owner of Parson Turkeys, shows his farm in Chihuahua to Paul Camhi, from the turkey distribution company Escosa.

Mexico City — It’s the season for cooking turkey all over the United States. And in Mexico, the appetite for this bird has been growing during the holidays, too.

Turkey has been served in Mexican lands even before the Europeans arrived to the continent. Nowadays, it is common to find it cooked with spicy salsas and particularly with the thick-and-sweet mole sauce during birthday celebrations.

But recently, the popularity of a more American-style turkey has been growing. Almost five decades ago, processed and precooked turkeys appeared and accelerated the consumption of turkey in a more “American” way.

Parson Turkeys is one of the main producers of precooked and smoked turkeys in Mexico, and also one of the pioneers of this product. They are based in Chihuahua, the state with the largest production of this bird in Mexico.

Paul Camhi is in charge of marketing and new businesses for Escosa, one of the largest and oldest distributors of Parson Turkeys in Mexico City. His company has has seen annual growth in the demand, and with a very similar pattern as in the U.S.

“In Mexico City, and in general in Mexico, we eat turkey in November, December and January. The strongest month is December,” Camhi says.

In Mexico, hundreds of companies buy precooked or smoked turkeys as a Christmas gift for their employees. That has pushed not only the sales of companies like Escosa and Parson, but also the preference of Mexicans to have turkey for Christmas.

According to the Mexican secretary of Agriculture, 90 percent of turkey consumption in Mexico is during the holidays. And from it, 40 percent is smoked or precooked.