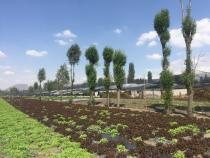 Rodrigo Cervantes
Xochimilco, in the southern outskirts of Mexico City, has been an agricultural community for centuries. 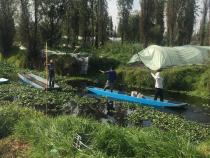 Rodrigo Cervantes
Farmers and field workers use rafts in the channels that divide the "chinampas" in Xochimilco to transport themselves and their goods. 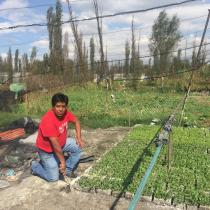 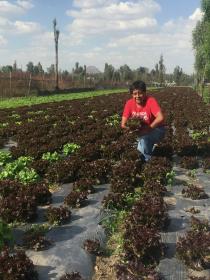 Seeds are among Arizona’s exports to Mexico. Some of them are grown in the outskirts of Mexico City and still using ancient pre columbian agricultural techniques.

Just a few steps away from the rowdy streets of Mexico City, and still within the city’s southern limits, hundreds of acres of green lands remind us of its peaceful past.

It’s a bucolic, peaceful and fertile landscape at the south of Mexico City. Six centuries ago, Aztec emperors and priests got their flowers from the fields. No wonder they called this place Xochimilco, which means, the land covered with flowers.

“Many are still surprised that we can still grow crops in Mexico City,” said Horacio Narciso Enriquez, a local farmer and businessman.

Narciso Enriquez, like his ancestors and many others in the area, has kept the tradition alive, growing not only flowers, but also edible vegetables and fruits that supply the city, the country and even parts of the U.S. All of this, using American seeds.

On his cell phone, Horacio proudly shows a YouTube video. You can see a distinguished guest visiting his parcels.

The British prince stopped by Xochimilco during an official trip two years ago to learn about agriculture in the area, which combines modern technology with ancient processes.

Centuries ago, the Valley of Mexico, where Mexico City was built, was covered almost entirely by a huge lake.

The Aztecs developed a special technique to extend their city, grow plants on floating rafts and shallow lake beds. They were called “chinampas," which were connected by a complex system of channels.

Most of the lake is gone, but the remaining chinampas are here, in Xochimilco, and Narciso Enriquez still uses that method.

While he walks across his acres, Narciso Enriquez points out tiny plants growing from chinampas that were probably built by the People of the Sun, centuries ago.

Baby spinach, basil, three kinds of lettuce and other vegetables are grown here. All of them are new varieties of produce that intend to satisfy modern and globalized palates.

And just like in pre columbian times, field workers still sail in little rafts on the channels to transport their goods.

Among the goods carried by them stands one of the main components for the crops: seeds.

According to data from the Mexican Congress, about 95 percent of vegetable seeds used in Mexican crops are imported, most of them from the U.S.

During the first quarter of 2016, Mexico imported about 3.3 million pounds of vegetable seeds from the United States.

That represented a trade value of $32.6 million, and a 62 percent increase compared to the previous year.

Narciso Enriquez explains that his family has been using imported seeds since the mid '70s.

He says he uses imported seeds either because the product is hard to find in Mexico or simply because quality is better.

“All the seeds are imported and come from the U.S.," he says.

Take lettuce for an example. In two months, Narciso Enriquez uses between 40,000 and 60,000 lettuce seeds. Ninety percent of them germinate and are entirely sold.

Among the seed sacks Narciso Enriquez uses, there is one marked with an Arizona brand: Sierra Seed, a company based in Nogales.

“Probably about 98 percent of the seeds we sell go to Mexico,” said Eduardo León, the sales Coordinator for Sierra Seed.

Their business is to import vegetable seeds from all over the world, even lettuce seeds from Yuma, and then export them.

“It’s cheaper to produce seeds in China than to produce it in the U.S.,” he explains.

Cost of labor and climate make the demand of seeds higher, as well as the production of seeds. In that way, seed production can sustain throughout the year.

“We are talking about millions of seeds," León explains.

Sierra Seed, as other seed companies in the United States, have exported their product to Mexico even before the North American Free Trade Agreement or NAFTA. According to León, the trade agreement just made it more complicated for their business.

“I’ve been here since before NAFTA and after, and when they signed that agreement, they started asking for more requirements,” he says.

So, should NAFTA be revised? León has his doubts.

“I don’t know; that’s a difficult question, because, how long has it been since they signed NAFTA? A lot of thing have changed since then," León says.

In Xochimilco, Narciso Enriquez said that has helped him build a larger variety of produce. So, would a change on the trade agreements with the U.S. affect him?

“In a globalized world, Mexico and the U.S. walk hand in hand,” says the Mexican farmer.

EDITOR'S NOTE: Fabiola Hengnel, Rocío Muñoz-Ledo and Juan Carlos Ríos from the college radio station Concepto Radial at the Tec de Monterrey in Mexico City contributed to this story, as part of a collaborative project with KJZZ.