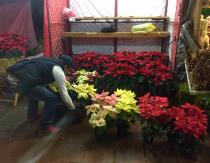 Rodrigo Cervantes
Rubén Ordaz and his family have been selling poinsettias in Mexico City for decades. All of them are grown in Xochimilco, an agricultural neighborhood at the southern city limits. 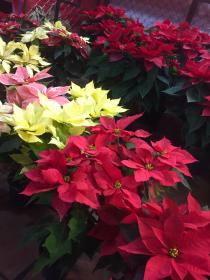 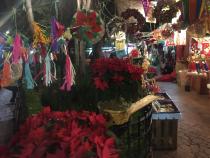 Rodrigo Cervantes
In street markets in Mexico City, it is common to find poinsettias sold with piñatas for the holidays.

MEXICO CITY — Poinsettias are growing at a record rate this year in Mexico, one of the main suppliers of the U.S. market. The colorful plants have an even more colorful history.

About 180 years ago, a botanist named Joel Roberts Poinsett was appointed as the first ambassador of the United States in Mexico.

Attracted by its seasonal beauty, ambassador Poinsett brought it to the United States.

There, the flower got the ambassador’s name, while its popularity grew as a festive ornament.

To this day, Mexico is still one of the top poinsettia growers in the world.

For this year, Mexican producers expect to grow about 35 million poinsettia flowers. This would represent a 75 percent increase compared with the harvest from five years ago. Most of the poinsettias stay in the domestic market and are exported to the U.S.

The original poinsettia flower is red, although nowadays producers have other colors — yellow or pink with spots — thanks to modern processes. According to the Mexican agricultural authorities, 9 out of 10 Mexican poinsettias are red.

The top states that produce this flower in Mexico are Morelos, Puebla, Michoacán and even the agricultural outskirts of Mexico City.

Rubén Ordaz is a flower seller in the streets of Mexico City. He brings the plants from Xochimilco, at the south of the city, where poinsettias have grown since the Aztec era.

Poinsettias are sold in Mexico City through November and right after the Día de los Muertos celebration, when people buy Zempasúchil, the traditional orange carnation used for the Day of the Dead altars.

According to Ordaz, poinsettias sell well thanks to a prevailing tradition, despite the current state of the economy in Mexico.

He said his customers complain about the impact of the dollar in their pockets, but they protest more about the elevated costs of the trees.

“I hope that the ‘nochebuena’ tradition never disappears, since it provides food to families like mine,” Ordaz said.

Ordaz hopes that Mexicans and Americans can keep the Christmas tradition of poinsettias alive, but also of brotherhood among them.

“There is no reason for becoming distant between us. They need us as much as we need them,” said Ordaz, referring to Mexicans and Americans. "Why should we go into different ways if we can stick together and help each other?"