As Uncertainty Towards Trump Administration Grows, The Mexican Peso Falls

As Uncertainty Towards Trump Administration Grows, The Mexican Peso Falls 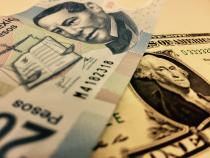 Rodrigo Cervantes
The Mexican currency has lost value against the U.S. dollar; more recently as a result of the market's fear towards Trump's trade policies.

During his campaign, and in his press conference on Wednesday, President-elect Donald Trump promised tougher trade regulations with Mexico. His words have already affected the value of the Mexican peso, according to experts.

The peso has been facing tough months, losing its value continuously against the U.S. dollar. The oil prices, the financial markets and the Mexican public finances have contributed mainly to its decline.

But the peso has also lost its value recently as a result of the markets’ uncertainty towards political decisions. Some investors perceive risks on how the U.S. will reshape its relationship with Mexico under Trump, particularly on trade.

And, as uncertainty prevails, investments in Mexico look risky, and the peso loses its value.

In the first two days after Trump was elected, the value of the peso declined almost 10 percent. And after his press conference, the currency reached its lowest point: around 22 pesos per dollar.

Leticia Armenta is an economics professor and researcher at Tec de Monterrey’s Mexico City Campus, an academic partner of KJZZ.

Armenta said the peso volatility will be very intense until the U.S. defines its policies with Mexico, while markets react with nervousness to Trump’s statements.

“It is a risk element, fundamentally," Armenta said. “And as trade between Mexico and the U.S. seems unclear, specifically after the statements of the American elected president, it makes the economy look unstable due to an element that will get weaker, which is trade”.

Markets are nervous by nature, Armenta said, but they are reacting with more fear towards Trump’s statements than to any other economic factor nowadays.

“What the new U.S. administration is saying is that there will be a change on the rules," Armenta said. "We still don’t know how much will they change, how soon or how deep, but it seems that it will be an aggressive change."

According to Armenta, it will take at least the first half of the year to see any signs of stability beneficial for the peso.

The Mexican government will have to demonstrate improvements on its public finances and growth based on their economic policies, while proving less dependency to the American market. At the same time, Mexican-based industries will have to grow, and the global economy also needs to show a steady environment.

Meanwhile, the peso’s weakening might benefit some people, including those receiving remittances from the U.S., American tourists and retirees in Mexico, and investors in some low-risk and price-controlled operations.