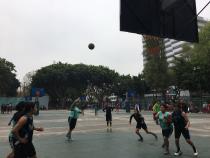 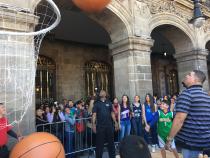 Jorge Valencia
Horacio Llamas, a former center for the Phoenix Suns and a native of Sinaloa, Mexico, played with young basketall fans at Mexico City's Zocalo Square on Monday. Llamas has been promoting the Suns' home games in Mexico City.

It’s Sunday morning in the heart of Mexico City, and team Oclajoma is trying to keep their lead over team Snakes. But soon, their point guard, No. 7, Sandra Ruiz, gets kicked out for fouling.

“It’s the first time in my life this has happened,” Ruiz complains.

Ruiz wants her team to win so they can keep their chances of advancing to the top division of the Delegacion Benito Juarez intramural league. She’s 21. She’s a college student. And playing basketball is her favorite thing to do.

Ruiz says she watches NBA recaps on YouTube and tries to emulate them. So she plays intramural, plays pick-up and plays by herself. She wants to be like her favorite player -- Golden State Warriors point guard Steph Curry.

The Phoenix Suns might not be the most talked about team among Mexican basketball fans, but that hasn’t kept two home games the team is hosting at the 22,000-capacity Mexico City Arena this week from selling out.

The Suns are hosting the Dallas Mavericks on Thursday and the San Antonio Spurs on Saturday.

“We’re glad that they’re there to watch us,” Suns President Jason Rowley said. “Maybe by coming to watch our game they’ll convert.”

The team, which brought about 150 people to Mexico City to prepare and help organize the games, will play wearing jerseys that say “Los Suns.” It’s a name the team first used in 2010, when it opposed Arizona’s anti-immigrant bill SB 1070.

But this time, it’s not about politics.

Rowley says he also hopes the games in Mexico will generate goodwill between Arizona and Mexico.

“At the end of the day, you could consider this an investment by the Phoenix Suns, as compared to just necessarily generating a return," Rowley says.

The NBA has been making this kind of investment since it first had exhibition games here in 1992. This is the first time it’s holding two regular season games in Mexico back-to-back.

“What we’re looking for with the games is to make sure that fans are getting into the game and really being in contact with the NBA,” Zarraga says. “You know, living the best experience that they could get, the real experience, the real stuff.”

The NBA makes its money outside of the U.S., mostly on video access to games and merchandise sales.

Zarraga says the league estimates more than 12 million people in Mexico watch their games at least once a week. And he says Mexico is one of the league’s top international markets, in part because it's so close and because fans here have money to spend.

Basketball has an audience of about 40 million people in Mexico, says Sergio Ganem,  president of Mexico’s professional basketball league. He says most fans are middle class and played hoops in school or university, just like Sandra Ruiz, from the Sunday intramural league.

After their game, team Oclajoma is celebrating. They beat the snakes 30 to 27. And Ruiz has just one last thing to say: “More NBA games in Mexico, please.”

And, yes: she did get tickets for the Suns against the Mavericks on Thursday.