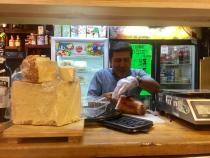 Since the November election, Mexico has been bracing for the inevitable shift in its relationship with the U.S. Mexico sent more than 80 percent of its exports to the U.S. last year, and incoming President Donald Trump has said he wants to correct what he says are Mexico’s unfair trade advantages.

In Mexico City’s historic Coyoacan Market, Daniel Pacheco, who runs a gourmet cheese stand, is one of many people not just bracing but already reacting to what the former head of Mexico’s central bank called "Hurricane Trump." Trump’s election has contributed to the dramatic drop of the Mexican peso’s value. So the cost of, for example, the French compte cheese Pacheco sells has swung up by nearly a third to $800 pesos per kilogram.

"Some suppliers don't want to give me set prices ahead of time anymore," Pacheco says, surrounded by wheels of imported and domestic cheeses. "They used to say, I'm going to keep the same price for several months, but now it goes up one month and goes up again the next. There’s a lot of uncertainty and the prices are constantly going up."

Pacheco says some of his suppliers are considering not carrying particular cheeses anymore. They’re just getting too expensive. But Pacheco isn’t discouraged.

"I’m going to bet on Mexican products," Pacheco says. "Mexican products are much better than they used to be. We have a very decent quality now, so I think it’s time to bet on our own things."

Just two miles away, at the venture-capital fund Ideas and Capital, managing partner Ricardo Elizondo says he’s preparing for the new U.S. election with caution. His firm invests in tech start-ups anywhere in the world, as long as they have ties to Mexico. In the U.S., Ideas and Capital has invested between $500,000 and $3 million in the start-ups Open English, Crowdfunder and Phunware, Elizondo says.

At the same time, Elizondo says he’s already lost one deal. A Canadian firm backed out of investing in one of his companies because of perceived uncertainty in the Mexican market, Elizondo says. The start-up can still grow, but would face tougher challenges and would likely seek investments from elsewhere in Latin America, Elizondo says. The venture-capital fund overall is seeking to cultivate more relationships in Eastern Asia and the Middle East, Elizondo says.

"So we have to keep on moving, and what we are doing is try to start to develop the networks that we are already developing in the United States, we are trying to develop them in other countries," Elizondo says.

Trump has promised to revamp or scrap the North American Free Trade Agreement, and the Mexican government is preparing to revisit the 22-year-old treaty. Antonio Ortiz Mena, an economics professor at Georgetown University who was part of Mexico’s original NAFTA negotiation team, says Mexico’s toughest negotiations might be internal.

"Sometimes when countries negotiate, the toughest negotiations are not between countries, but within," Ortiz Mena says. "Those are really, really tough negotiations."

The central points of Trump’s promises are manufacturing jobs and the invoice for a border wall. As a result, some of manufacturing jobs in Mexico have evaporated. Ortiz Mena says the Mexican president is organizing a team to coordinate foreign policy with migration, national security and the economy.

"It will be fairly easy to make executive decisions," Ortiz Mena says. "Sometimes decisions have to be made in a quick and forthright manner."

Mexican leaders have said they will negotiate economic issues, but categorically say the country will not pay for a border wall. Much like the Mexican government, Ortiz Mena is optimistic about his country’s future. He cites the gravity model of trade of international relations, in which two countries’ relationship is largely determined by the size of their economy and the distance between them. The U.S.-Mexico border is the busiest in the world and is almost 2,000 miles long, and according to an estimate by PricewaterhouseCoopers, the Mexican economy will be the sixth-largest one in the world by 2015.

But the key here is that for now there’s anxiety and uncertainty. And people on the street, in businesses and even government are already acting on it.