download
Laurel Morales
People from many southwestern tribes drove to Flagstaff to protest the Dakota Access Pipeline as well as other industries that threaten their sacred places. 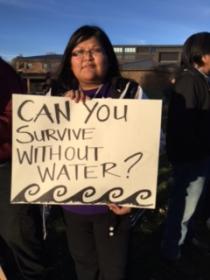 Laurel Morales
Robyn Wadsworth, 23, drove from Second Mesa on the Hopi Nation to rally in Flagstaff for the Standing Rock Sioux's water but also for the Confluence, a place she and her family go to pray.

Last year, hundreds of thousands of people from around the world united with the Standing Rock Sioux Tribe to protest the Dakota Access Pipeline. That protest continues as President Donald Trump advances development. The movement has brought a megaphone to the battle between what tribes believe to be sacred and what westerners consider fair game all across the United States. KJZZ’s Fronteras Desk Correspondent Laurel Morales spent months digging deeper into this pervasive issue here in the Southwest to produce this series Earth+Bone.

Two years ago, Energy Transfer Partners held a meeting with the Standing Rock Sioux Tribe in North Dakota. The company laid out their plan to build a $3.8 billion oil pipeline across the Missouri River and adjacent to the reservation. Engineer Chuck Frey explained they currently move the oil by rail.

“This pipeline will give the producers an alternative means of moving product,” Frey said. “We believe it’s more energy efficient and a safer way to transport crude oil long distances.”

Former Councilwoman Phyllis Young told Frey and other company representatives that the Standing Rock Sioux are the keepers of the river and a pipeline leak would be devastating to them.

“Water is life,” Young said. “You as a human being cannot drink oil. You need the water to survive. We are the vanguard. We are … the horn of the buffalo that’s who we are. We are the protectors of our nation. We will put our best warriors in the front. Do not underestimate the people of Standing Rock.”

Fast forward two years the tribe launched one of the world’s longest protests. Thousands of people drove, flew or hitchhiked their way across the country to block construction of the pipeline.

Police sprayed tear gas, shot rubber bullets and fired water cannons in below freezing temperatures. Some protesters threw rocks and burning logs at officers. Photos and videos of the violent protests appeared in a blaze across Twitter, YouTube and Facebook using the hashtag #NoDAPL.

Cities across the country responded with rallies to support Standing Rock.

In Flagstaff, people of several Southwestern tribes march not just for Standing Rock but for their own sacred places. Andy Dan is Navajo, but he knows the pain of Standing Rock all too well. His family has been relocated and has suffered fatal illnesses from working in the coal mine.

“The last 100 years everything has been taken from native lands so it’s about time we come and stand up and unite as indigenous people,” Dan said.

Here in the southwest “protect the sacred” is a familiar battle cry. For decades, 13 tribes fought a ski resort that wanted to make snow out of treated wastewater on a sacred mountain. In the end the resort won.

In 2008, the 9th Circuit Court of Appeals ruled that making snow, while offensive, posed quote “no substantial burden” on the tribes’ exercise of religion on the San Francisco Peaks. Today, the city pumps treated wastewater several miles up the mountain to make snow. And it is a substantial burden for Navajo activist Klee Benally.

“It’s something that worries me all the time,” Benally said. “When I pray or when I participate in ceremonies, I question the effectiveness of those prayers.”

Benally and many others are hopeful the Standing Rock Sioux fight represents a turning point. On Dec. 4, 2016, the Army Corps of Engineers halted the bulldozers in their tracks so the federal government could conduct a thorough environmental review of the project with the tribe's help.

But President Trump has signed an executive order advancing the development of the pipeline.

“It would be patently illegal for the incoming Trump administration to simply reverse the decision to perform a full environmental review of the pipeline crossing at Lake Oahe,” said Jan Hasselman, an attorney for Standing Rock.

Trump isn’t skipping the review process but through a loophole is attempting to expedite it, as Hasselman and the tribe prepare to go to court.