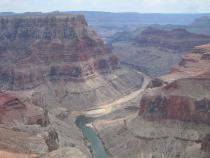 Laurel Morales
The confluence, or the place where the Colorado and Little Colorado Rivers meet, is considered sacred to many and an opportunity for economic development to others.
Laurel Morales
Hopi Chairman Herman Honanie listens as Hopi cultural preservation director Leigh Kuwanwisiwma talks to Zuni, Navajo and Hopi people who want to preserve the confluence site.
Laurel Morales
Hopi Chairman Herman Honanie says, "when I think about the history the emerging of the Hopi people from the Grand Canyon and as we return back in that selfish way I say it’s ours and we must let it remain as it is." 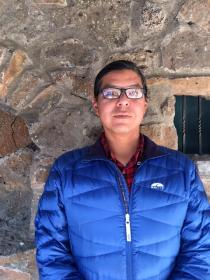 Laurel Morales
Jason Nez is a Navajo archaeologist. He says, "our identity comes from these places."

A developer claims a tourist attraction on the Navajo side of the Grand Canyon would create 3,000 jobs. But four tribes consider the location holy ground. It's called the confluence - the place where the Colorado and Little Colorado Rivers meet.

It’s here where Renae Yellowhorse sends her prayers out to the wind, to her Navajo ancestors.

“Where the waters come together, that’s where life comes from, and then when we go back, after we finish our life journeys, that’s where we go back to,” Yellowhorse said.

From a cliff 3,500 feet above the confluence you can tell it’s just rained upstream, so the Little Colorado River is a red muddy brown and the wider Colorado River is a deep emerald green. At the intersection of the two, they swirl and twist together to make a new color all their own.

Yellowhorse and her family live a few miles from the confluence. To them, protecting this place is self defense.

But the developers say there’s no record of the confluence as a culturally significant or sacred place. Those records fail to recognize historical and current day beliefs and practices.

For the Navajo and Zuni the beliefs are similar. Zuni elder Octavius Seowtewa said the confluence is a sacred place of origin.

“Sacred is something that you’re taught, that you can understand because you’re a part of the earth, part of the canyon, part of the sky,” Seowtewa said. “There’s a lot of people they go to church and they hold that sacred. But it’s only in a little portion of their lives, like maybe Sunday morning. But for us, when we come here we leave an offering, we talk to our ancestors and they’re here listening to us, so that’s sacred.”

The Hopi Tribe also believes the confluence is sacred. It has voted against the proposed development.

“It is just surreal, it’s majestic,” said Herman Honanie, the chairman of the Hopi Tribe. “Why would anybody want to alter it, minute or grand? This belongs to the people. And I feel, in some way, that’s why it was created. More so when I think about the history, the emerging of the Hopi people from the Grand Canyon and as we return back. In that selfish way, I say it’s ours and we must let it remain as it is.”

“It’ll take 10 minutes,” Whitmer said. “You’ll get in an eight-person gondola. You’ll descend 3,500 feet, 1.7 miles, and you’ll arrive at a tram station. You’ll be able to go on a river walk, stroll along it and see the canyon from the bottom up.”

The Hualapai Tribe built a glass skywalk over the east side of the canyon in a similar endeavor. And they’ve had more than a million visitors this year.

Whitmer said it will cost $1 billion, if he can convince the Navajo council and president to break ground. Whitmer wants the tribe to shell out $65 million up front to build roads, power and water lines. Money they’d eventually make back in ticket sales, he said.

But it’s unclear what percentage of those sales the tribe would see.

“If they’re going to sustain their people and preserve their culture, they have to create some jobs,” Whitmer said. “It’s one of the most impoverished, if not the most impoverished place in the state. We believe the project actually helps them preserve their culture and present it in a dignified, respectful way to the rest of the world. We’re going to have a discovery center that will tell some of the Navajo stories. It will tell about their relationship to the canyon and the sacredness of it.”

But Navajo archaeologist Jason Nez said he’s not buying it.

Nez said Whitmer’s argument is degrading and his plan would erode their culture and identity.

“Our identity comes from these places,” Nez said. “Who we are as natives is rivers, canyons, and mountains, all of that makes up who we are as Native Americans. And when we destroy these places, when we desecrate them, when we belittle them, we’re destroying ourselves.”

But many people are torn. The Navajo Nation Council is divided over whether to protect this land.

Navajo council member Walter Phelps isn’t ready to say what side he’s on.

“There’s no doubt we have tremendous need,” Phelps said. “Our people need jobs. There’s a need to stimulate our communities, especially those who have been impacted by the former Bennett Freeze.”

Many compare the Navajo Nation to a developing country. But this corner of the reservation is even worse off because of something known as the Bennett Freeze. Eight thousand Navajo people have lived paralyzed in a state of poverty, extreme even by Navajo standards.

In 1966 Robert Bennett, the commissioner of Indian Affairs, outlawed construction of any kind on this land in northeastern Arizona. This was his solution to a land dispute between the Navajo and Hopi Tribes. The tribes came to an agreement in 2006 and former President Barack Obama officially lifted the freeze in 2009.

“I would personally have a lot more comfort if the people were to make a decision on it, preferably in the form of a referendum,” Phelps said. “Then we would know. Because that’s what we did with the gaming.”

Zuni elder Seowtewa said this decision involves more than the Navajo people. To build this tourist attraction would hurt relations with other tribes.

“It’s going to be a long fight but we’re here for the bitter end,” Seowtewa said.

The Navajo Council is currently considering the Escalade proposal. At least one committee has voted against it.

Even if they are able to come up with a compromise they can all agree with, the Navajo President has said he would veto a development.

If the Navajo president is somehow swayed by the developers, three groups are prepared for a legal fight including the Hopi Tribe over their sacred sites, the Havasupai over water and the Navajo families over grazing rights.