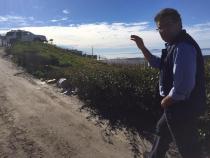 Six Mexican senators are planning visits with publicly elected officials and Latino community leaders in Phoenix on Friday and Saturday, as part of a campaign to cultivate relationships with American officials friendly to Mexican migrants and to help migrants facing possible deportation.

The senators, from three often rivalling political parties, will meet with Phoenix Mayor Greg Stanton, Tucson Mayor Jonathan Rothschild and Congressman Ruben Gallego. On Saturday, they’re hold a forum on migration to the U.S. at the Arizona Community Foundation.

Sen. Armando Rios Piter, who represents the state of Michoacan, which has one of the largest populations of migrants living in the U.S., says he’s worried about President Trump’s apparently hostile policies toward migrants. The Mexican government has set aside almost $50 million in additional funding for the country’s 50 consulates in the U.S. to help migrants facing likely deportation.

“Arizona has been very hostile, not only since Trump, but when Arpaio was there,” Rios Piter said. “It has been a very hostile place to our people, but I think we need to change the narrative.”

Rios Piter says Arizona and Mexico’s relationship has long been mutually beneficial, citing that 40 percent of the state’s exports go to Mexico. Arizona’s exports to Mexico represent about 3 percent of the state’s gross domestic product, according to an analysis by The Economist. Almost 90,000 Arizona jobs are directly dependent on trade with Mexico, according to an analysis by the Woodrow Wilson Center.