Thousands Protest In Mexico Against Corruption And Trump

Thousands Protest In Mexico Against Corruption And Trump 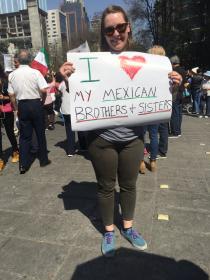 Rodrigo Cervantes
Samantha Williams lived in Phoenix but is now studying for her masters degree in Washington D.C. A field project brought her to Mexico about a year ago. 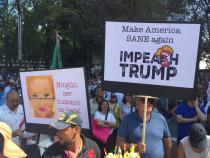 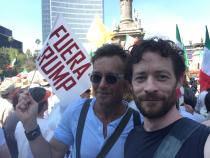 Rodrigo Cervantes
Mark Chilton (right), a Canadian architect, lives in Massachusetts, but joined the protest in Mexico City while visiting. 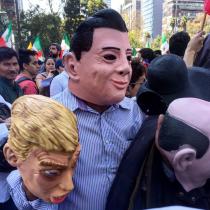 Rodrigo Cervantes
A man carries masks of presidents Trump and Peña Nieto during the rally in Mexico City. 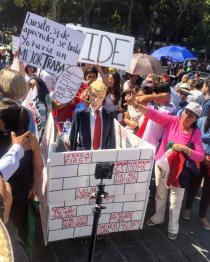 Tens of thousands of protesters rallied simultaneously on Sunday in several cities in Mexico. An estimated 20,000 protested in Mexico City alone.

There has been a considerable amount of protests in Mexico since the beginning of the year, most of them after the government raised the price of gasoline.

This time, they marched against local corruption and, mainly, against Donald Trump’s plan to build a border wall and deport thousands of migrants.

At Mexico’s capital, protesters gathered at the Independence Angel, the emblematic monument in Mexico City, just two blocks away from the American embassy.

The protesters were mainly dressed in white as a sign for peace, and marched peacefully.

They constantly chanted "Mexico, Mexico," as well as the national anthem, while waving Mexican flags.

Graciela Gibbon, a Mexican citizen and real estate agent, was among the protesters.

“He (Trump) is something out of this world. I’ve never seen something like it," Gibbon said. "It’s a shame that the United States could have a president like him. It is a nation that we all respect and I think we respect, but we don’t respect him."

The protests were organized by dozens of civil rights organizations, as well as some independent institutions and universities. Most of the people who participated used social media with the hashtag #VibraMexico (#MexicoVibrates).

Some politicians and opinion leaders participated, but they joined as citizens and not as representatives of their parties.

There were also foreign citizens participating, like Mark Chilton, a Canadian architect. He lives in Massachusetts, but joined the protest in Mexico City while visiting.

“He (Trump) has problems with Canada and there will be fights with Canada, but it’s pure racism and it can’t be seen like anything else when he turns to Mexico,” stated Chilton.

The rallies were also a call to fight corruption in the country. President Enrique Peña Nieto has been facing public accusations of alleged corruption.

There is also anger among some Mexicans after he invited Trump, then as a candidate, to Mexico.

Peña’s rejection to pay for the wall and his public support to Mexican migrants in the U.S. have given him certain public acceptance. However, the protest was also a way to push the Mexican authorities to do more on defending the country against what may seem like aggressive policies from the U.S.

The protests reflect the tense situation on the relationship between Mexico and the United States.

But Arizona, and several American states, have an essential business partner in Mexico. And that explains why commissions from both sides of the border have been meeting constantly the past few months.

Armando Rios Piter, one of the Mexican senators that visited Phoenix last week, was participating at the protest. He has expressed in previous interviews his interest to keep bridges working, but also to defend national interests, if necessary.

Samantha Williams lived in Phoenix but is now studying for a masters degree in Washington D.C. A field project brought her to Mexico about a year ago. She attended the protest carrying a sign that read: “I love my Mexican brothers and sisters."

“So I came out one, to feel closer to the resistance and two, because I think it is important and right for people from the United States to be out here with Mexicans showing solidarity,” Williams said.