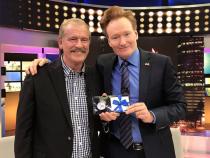 The show is expected to poke fun at the tense relationship between the U.S. and Mexico. Actor Diego Luna, who recently starred Star Wars' "Rogue One," will be there. Another guest in the half-comedy, half-critic show will be former Mexican president Vicente Fox.

Just like president Donald Trump, Fox is well-known as an outspoken politician and businessman who loves to tweet — but usually against Trump.

“People say that he (Trump) doesn’t like my tweets and gets mad with my tweets,” Fox says. “I don’t have confirmation of that, and I don’t need it: what I am doing with my tweets is speaking to the American people.”

Fox is a strong voice against Trump’s policies in Mexico. During his participation at the O’Brien show, he made sure to make clear his posture, even with humor.

As he arrived to the studio, he brought the comedian a gift.

“It’s a beautiful pair of boots that Conan took with him,” Fox says.

And it’s the stitching on the cowboy boots what made the audience crack up, as it reads that Mexicans will not pay for the (curse word) wall.

O’Brien toured around Mexico City, meeting people and even pretending to collect funds for building the border wall. None of the people he asked agreed to donate.

Fox thinks that O’Brien “is a great guy, very loyal to Mexico and to the United States.”

As for Trump’s policies regarding trade and immigration, Fox considered that it is important for the U.S. administration to understand that the world belongs to humanity, not to Trump or to the U.S.

“I guess he, señor Trump, will learn that way, the hard way, that he has to change profoundly the way he acts and the way he works.”

Currently, the Mexican leader is the head Centro Fox, a presidential library and nonprofit organization focused on education. Centro Fox has several agreements with community colleges in the US, including Arizona, a state he knows well.

Fox recommended Trump visit Arizona and learn on how both countries can be good neighbors.

“He has to go to Tucson and see there all the great relationship between Mexicans and Americans working together and working to build better countries,” stated the former president.