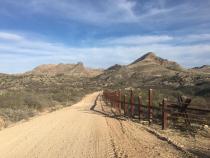 The Homeland Security Department pushed back its official day for when it will start taking proposals for the border wall by a week. But it’s added some language that hint at the specifics it wants to build in.

First, perhaps as a nod to the president’s desire for a quote big beautiful wall, the new requirement is that the wall meet aesthetic requirements. It must also be at least 30 feet high and made of concrete.

Ralph Hicks of R.E. Staite Engineering in San Diego said the company's plan for an aesthetic wall is to make it compatible with the surrounding environment. He also said the wall design the company is creating will make it able to withstand tunneling attempts, a favored method for drug cartels to traffic narcotics into California and Arizona.

"It will also be a smart wall where we integrate advanced electronics into the wall system itself," he said.

Construction of the wall will begin around the Border Patrol’s Tucson and El Paso sectors.