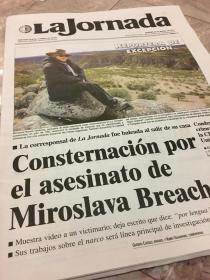 Jorge Valencia
Miroslava Breach, a correspondent for the national Mexican newspaper La Jornada, was gunned down outside her home in Mexico's northern state of Chihuahua, authorities said. Breach had written extensively about drug trafficking and corruption in the state. 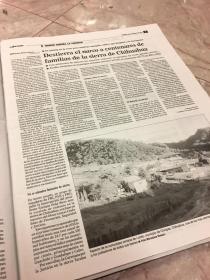 Jorge Valencia
The Mexican newspaper La Jornada re-published a 2016 report by reporter Miroslava Breach on drug traffickers a day after she was gunned down in the capital of the northern state of Chihuahua.

A Mexican reporter was fatally shot in the northern state of Chihuahua this week. She's the third journalist killed in Mexico this month.

In a statement on the state prosecutor's website, authorities said Miroslava Breach was shot inside of a red sedan in the city of Chihuahua on Thursday morning. Breach was a correspondent for the national newspaper La Jornada. And according to the newspaper, she was shot eight times and her assailants left a note saying, "Tattletale."

Breach had long reported on corruption and drug trafficking in Chihuahua. After her death, La Jornada re-published an article in which she reported that drug traffickers were displacing people from their land in rural Chihuahua so they could plant opium for heroin.

Breach identified at least one drug trafficker by name, and she wrote that instead of going to authorities, displaced people were praying to the Virgin of Guadalupe.