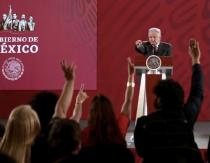 MEXICO CITY — Mexico's Senate is confronting the Mexican president and wants him to stand against President Donald Trump's plans to stop migration. But, instead, the Mexican federal government sees progress.

The Mexican Senate requested president Andrés Manuel López Obrador to send a diplomatic letter about possible human rights violations during the arrests of undocumented immigrants in the U.S.

But AMLO stated that he won’t send any letter to his American counterpart, as he sees progress on the strategies to reduce migration.

López Obrador said deportations from the U.S. have decreased 30%, and none of the deportees are Mexican. He says only 1,800 Mexican migrants are waiting for trial.

Weeks ago, the president of the Senate, Porfirio Muñoz Ledo, had warned of the unconstitutional use of the National Guard to detain migrants, another comment that López Obrador disdained.