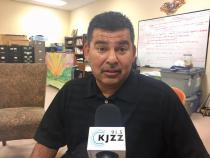 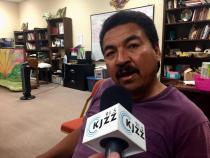 Ismael Delgado and Sixto Paz could be deported at any time. Rather than go quietly, they’ve each spent hundreds of days living in sanctuary at Shadow Rock United Church of Christ in Phoenix.

Paz and Delgado led very active lifestyles before they went into hiding. Adjusting to a new life within the Shadow Rock campus has not been easy.

The men grew up in small Sonoran towns just a few miles apart. Yet they’d never met before sanctuary. It helps having each other’s company now.

“When he’s desperate, I help him,” Delgado said in Spanish. “And when I am desperate, he helps me.”

Shadow Rock offers sanctuary so people like Delgado and Paz can buy time while lawyers seek a solution to their immigration case.

Federal agents have recently arrested undocumented immigrants at courthouses across the United States. As a new sanctuary movement struggles to gain traction during uncertain times, there's concern that an Obama-era rule of avoiding so-called sensitive locations may be coming to an end.

Arizona has a history of sanctuary activism. During the 1980s, churches in Phoenix, Tucson and Nogales helped Central Americans fleeing violence. This led to federal indictments and convictions. But a coalition of faith groups eventually won a First Amendment lawsuit against the federal government.

“What does that look like? I don’t know,” Reyes said. “I think we are going to see that. Is it going to turn into some kind of underground sanctuary railroad? I have no idea.”

But recent immigrant arrests at courts from Maine to California have revived the debate over where ICE agents should be working.

If ICE is willing to go places it hasn’t gone before, Reyes wondered what would stop it from going into churches.

"This administration has made it very clear that they are going to make it hard for everybody -- those without documents and those who try to help them stay in this country," Reyes said. "How far they take that is going to be up to them."

Donald Trump ran for, and won, the presidency with a hardline stance on immigration. A decision to target places of worship could backfire if big churches leverage their political clout to take a stand, Reyes said.

“And that message isn’t political. It’s based on the everlasting life of your soul,” Reyes said. “I think therein is where the administration runs a huge risk.”

Some people at Shadow Rock have already decided that protecting immigrants is worth the personal risk. After a prayer vigil for a man with a check-in appointment at ICE headquarters in Phoenix, they stayed inside the church for civil disobedience training.

ICE did not arrest the man, and told him to return in 30 days. The action turned the church's protest into a picnic. Still, Shadow Rock's senior minister, Rev. Ken Heintzelman, said he was willing to go to jail.

“When the ante is upped, not by us, but by the implementation of unjust policy, then we have to match that with a faithful response,” Heintzelman said.

Shadow Rock has offered sanctuary since 2014. When the idea first came up, Heintzelman said it caused a crisis of faith within the church's flock.

“It wasn’t like we thought about it, prayed about it, studied it and discerned, took a series of votes and everyone felt warm (and) fuzzy about it,” Heintzelman said. “It was quite the opposite.”

To have success like the movement in the '80s, Heintzelman said churches have to win the moral argument.

“Could there be legal consequences? There could be,” Heintzelman said. “It has yet to be tested. And we’re going to keep doing it because people should treat people the way people should be treated.”

Heintzelman has more concern for parishioners than prosecution. He believes offering sanctuary puts them on the right side of history. To have success like the movement in the '80s, he thinks churches have to win the moral argument.

“I think there (are) lessons to be learned from that,” Heintzelman said. “And that is, as a church, remain faithful. Be consistent in your faithful response. And we will win.”

Winning means people like Delgado and Paz get to stay in the United States. The former roofer and kitchen manager live on the first floor of the church.

Both men pride themselves in putting food on the table. When Paz thinks about his family needing help, he feels trapped.

“You feel useless,” Paz said in Spanish. “You feel, to speak vulgarly, like garbage.”

A recent memo to federal prosecutors from U.S. Attorney General Jeff Sessions prioritizes going after people who harbor immigrants. But a Department of Justice spokesman said the language refers to a crackdown on immigrants with criminal backgrounds, human smugglers and document forgers.