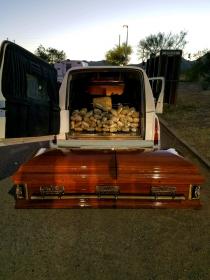 U.S. Border Patrol
A drug-sniffing dog found 67 pounds of marijuana inside a hearse.

Traffickers have had some unusual methods to smuggle drugs. One trafficker tried a whole new way Saturday night in Southern Arizona.

Agents first noticed a white hearse on the highway north of Tombstone. Officials haven’t said why, but the hearse was unusual enough to cause the agents to pull it over.

A drug-sniffing dog found 67 pounds of marijuana. The bricks of marijuana were stashed inside the polished wood coffin.

Agents noted that the coffin was also stuffed with manure, apparently to mask the smell.

The driver was a 28-year-old U.S. citizen and is being charged with narcotics smuggling.