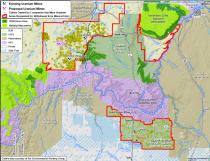 Grand Canyon Trust
A map showing the location of uranium mining claims near the Grand Canyon.

The House Natural Resources Committee passed two bills Wednesday that would prevent companies from mining for uranium near the Grand Canyon.

The first bill, the Grand Canyon Centennial Protection Act, makes permanent a 20-year ban on mining claims on land surrounding the national park. The second bill would remove uranium from the federal list of critical minerals, which can be subject to loosened environmental regulations.

Arizona Congressman Raul Grijalva, sponsor of the bills, said in a statement that the Trump administration added uranium to the list last year under industry pressure, despite a lack of scientific, economic or national security justification.

Last month Energy Fuels Resources, which holds many mining claims in the area around the Grand Canyon, petitioned the federal government to purchase its uranium from domestic producers.