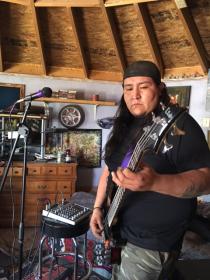 Laurel Morales
Brett Begay plays bass for I Dont Konform. He says heavy metal helps him deal with his anxiety. 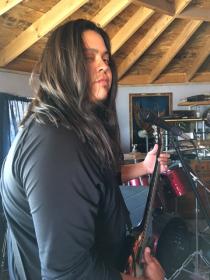 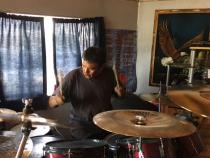 Laurel Morales
Randell Keye Billy has played drums since he was 15. He says when he's mad he beats on the drums to make sense out of it. 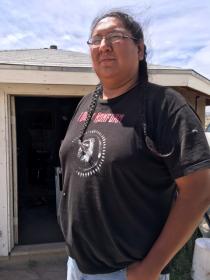 Laurel Morales
Tom Lilly, friend of the band, wears an I Dont Konform t-shirt outside the hogan where they practice.

A Navajo heavy metal band is releasing its first album May 27. They call themselves “I Dont Konform.” And unless you live on the reservation you probably haven’t heard of them. But they recently got the attention of one of the most sought-after producers in the world.

The band practices in what appears to be a traditional Navajo dwelling called a hogan in the dusty capital town of Window Rock. But, once inside, it’s a typical man cave complete with pinups and a velvet painting of an eagle. The amps are cranked but lead singer Kyle Felter said there are no neighbors to complain here.

“I love the anger of it I guess,” Felter said. “It gives me an adrenaline rush every time. After you’re done screaming in a mic and playing it’s just like you’re relaxed. You feel cleansed, I guess … Playing metal guitar is the best therapy for me.”

Felter, whose uncle sat him in front of Metallica and Pantera videos when he was a kid, isn’t the only one who has to release some aggression. Heavy metal has risen in popularity among young Navajos over the last couple of decades.

Felter wrote the track "EPA," it’s actually a more colorful name for the federal Environmental Protection Agency, after it accidentally spilled 3 million gallons of mine waste into a southwest river system two years ago.

I Dont Konform’s lyrics focus on the spill, but also on the tribe’s deadly legacy of uranium mining contamination. The EPA has been working with the tribe over the last several years to clean it up.

Felter sings: “To protect us not infect us is your responsibility, To nurture not to murder but now you turn your back for greed.”

The suicide rate among American Indians ages 15-24 is twice the national average.

Felter’s cousin, who played drums for the band, committed suicide last year. Felter wrote "Time To Go" as a tribute to the 29-year-old.

The band’s story coming from this place of oppression and depression is what appealed to Grammy award winning Metallica producer Flemming Rasmussen. Felter found him on the Internet. He thought they never stood a chance of getting Rasmussen’s attention but he knew he had to try.

“He’s like one of the top five producers in the world,” Felter said. “So he’s used to getting the best stuff all the time and we come in with these bombed out demos… It was about little less than a week later I got a response. I didn’t expect anything.  He was like, ‘I really like you guys’ aggression in your music. You guys’ story is interesting. And he was like, 'I really want to get this project going.’”

The only problem was the money. Rasmussen’s studio is in Denmark. And he charged the band a $1,000 a day for a 10-day recording session. So the band raised the money hosting shows, selling food at flea markets and borrowing from their families.

Last summer they finally made the trip, which turned into an epic journey. They flew the cheapest way they possibly could on standby crisscrossing the country a couple times and sleeping in airports. It took them four days to get there.

“To me, it was scary because I’ve never been on a plane before,” Begay said. “I still can’t believe we went over there. We were the most interesting out there, which we’ve never been ... Standing there like what’s everybody staring at us for? It was like their first time seeing a Native American.”

Now back on the reservation "I Dont Konform" is getting ready to release the album at a music festival called Rock The Capital in Window Rock.

The band plans to use the proceeds from the concert and first album to pay back everyone they owe. They hope there’s enough left over to record a second album with Rasmussen next year.