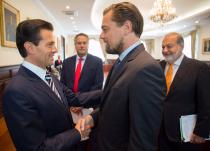 Presidency of the Republic of Mexico
(From left) Mexican President Enrique Pena Nieto, actor Leonardo DiCaprio and magnate billionaire Carlos Slim signed an agreement in the Mexican national palace to help save the vaquita porpoise.

Actor Leonardo DiCaprio, Mexican President Enrique Pena Nieto and magnate billionaire Carlos Slim are teaming up to save a small porpoise that is on the brink of extinction.

The new agreement, which they signed in the Mexican presidential palace on Wednesday, says the Mexican government will step up efforts to stop illegal fisherman, including prohibiting night fishing.

“We have implemented an historic effort to avoid the extinction of a unique species in the world and also to protect important ecosystems,” Pena Nieto said in a statement.

In turn, DiCaprio and Slim promised to help fund non-gillnet options to help locals whose livelihood has come to depend on illegally fishing totoaba, a fish whose swim bladder is a prized delicacy in Eastern Asia, and inadvertently trapping the vaquita. They also committed to help fund local community development.

In March, the Phoenix Zoo donated $65,000 for efforts to help save the vaquita.

“A plan to promote the adoption of more sustainable fishing practices will be created together with local organizations and communities,” DiCaprio wrote in a Tweet.

The vaquita is a mammal that can grow up to 5 feet long and its population is native to the northern Gulf of California, according to the World Wildlilfe Fund.

It’s biggest threat is local fisherman, illegally using large gill nets to catch a fish that is a delicacy -- and expensive -- in Eastern Asia. The net also traps the vaquita, and keeps it from rising to the surface for air.