At Mexican Medical Fair, Arizona Companies Help Each Other 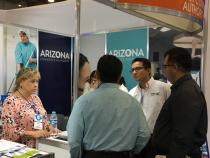 Jorge Valencia
Diane Barker (left) of the Tucson-based medical manufacturer WestMed speaking with a representative from a distribution company and prospective clients at the ExpoMed medical device fair in Mexico City.

Diane Barker stood behind a table with small medical devices. She pointed at a pacifier designed to help small children undergoing surgery inhale anesthetics. Then she pointed to a small box designed to warm up and humidify anesthetics for adult surgery.

“When they cut you open, you lose a lot of heat,” she said. “You need to keep your core body temperature up.”

Barker oversees international sales for the Tucson-based medical device manufacturer West Med. And Barker, who said her company has been selling products in Mexico for more than 10 years and does almost $1 million in annual sales here, helped four other Arizona companies looking to expand or break into the Mexican market.

The Mexican market for medical devices is growing: Domestic production here grew by 14 percent to more than $15.5 billion over the last five years.

“We don’t have all the business that we’d like to have in Mexico,” Barker said with a shrug. “Of course, who does? You can have never have too much business.”

Next to Barker at the booth organized by the Arizona Commerce Authority at the medical fair, stood Jean Ekobo, who founded a company called BioNovelus five years ago.

Ekobo was in Mexico looking to learn how to get an organic sanitizer gel into the Mexican market, and took advantage of Barker’s experience to ask her for advice.

Barker told Ekobo the hardest part is that every country has its version of the U.S. Food and Drug Administration, and that the country’s with the toughest regulations are in the European Union. So, she advised, get ready for long application processes.

“Once you get, like, 10 of them behind you,” she told Ekobo, “you’ll have packets that are basically ready to go, and you just have to add more or take things out of, so it does get easier.”

Which was welcome advice for Ekobo.

“I feel great about that,” Ekobo said. “It’s just what we’re living right now. We started in Costa Rica and in Guatemala and now we’re coming to Mexico.”