One Arizona Plans Another Big Impact On 2018 Elections One Arizona is a non-partisan coalition of activist group. They aim to file 200,000 voter registration applications for the 2018 elections.
Courtesy of One Arizona
By  Matthew Casey
October 11, 2017
Tweet

One Arizona Plans Another Big Impact On 2018 Elections 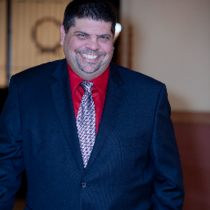 Couresty of Barrett Marson
Barrett Marson, CEO of Marson Media
Matthew Casey
Ian Danley, executive director of One Arizona for the 2016 election cycle. Danley recently took a leave of absence from One Arizona to lead David Garcia's campaign for governor.

The lunch crowd bustled into The Vig Fillmore, a popular restaurant among Arizona’s elected officials.

Marson works on a lot of political campaigns, and regularly meets clients at The Vig. He also connects reporters with sources, myself included.

Marson just started as a consultant for Daniel Valenzuela’s campaign to be mayor of Phoenix. He came to The Vig to talk about Arizona's Latino voters and the 2018 election. (EDITOR'S NOTE: Marson was not speaking for the Valenzuela campaign when he was interviewed for this story.)

“Until they truly show that they can come out in large numbers and vote, they’re always going to be an afterthought for a significant amount of candidates,” Marson said.

One Arizona, a non-partisan coalition of activist groups, said about 450,000 Latinos voted in Arizona in 2016.

The alliance calls the turnout historic. A sign that a long-awaited shift in political power is in motion. Marson agreed there was progress.

“But I am skeptical that in 2018, we will see a significant increase in Latino voter participation,” Marson said.

“I think in Maricopa County, you do see a Latino electorate that is engaged and active on their terms already,” said Ian Danley, who served as executive director for One Arizona. “And the trick now is just to make sure that is statewide.”

Danley just took a leave of absence from One Arizona to run David Garcia’s campaign for governor. He said politicians who see Latino voters as an afterthought will get left behind.

“I think that is very cynical, dated way of thinking,” Danley said.

“I don’t know how many of those folks are actually going to turn out,” Danley said. “That will be a big challenge again. Midterm elections tend to be a little under the radar.”

Among the people One Arizona helped register last year, those 35 and under voted at a 16 percent higher rate than their state counterparts, Danley said.

Age is a key factor when it comes to Latino voter turnout, said Dr. Lisa Magaña, professor of political science and interim director of the School of Transborder Studies at Arizona State University.

“I think part of it is we have to wait for this population to not only get larger, in terms of numbers, but to get older as well,” Magaña said. Elected officials who don’t acknowledge the changing political landscape in Arizona risk their future, she said.

Arizona’s Latinos have had political impact in ways other than voting, according to Magaña. There may not be an overwhelming ballot box victory to mark when the Latino electorate becomes dominant in the state.

“I think slowly, we are having successful campaigns, successful initiatives,” Magaña said.

Raising the minimum wage is one example. One Arizona endorsed Proposition 206 in 2016 and voters strongly agreed.

Some lawmakers pondered ways to block the measure from taking effect. Marson, the political consultant, said it should have grabbed their attention in a different way.

But raising the minimum wage was popular with voters across the state, regardless of their ethnicity, Marson said. For elected officials to treat Latino voters as more than an afterthought, turnout has to reflect new registration numbers.

“(Latinos) have to show that they can swing races,” Marson said.