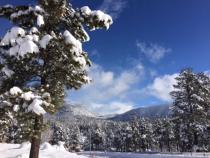 Laurel Morales
On snowy holidays Flagstaff sees an inpouring of as many as 10,000 more people seeking a winter wonderland experience.

Pretty soon the already-crowded Flagstaff streets are going to become bottle-necked with thousands more cars. On snowy holidays Flagstaff sees an in-pouring of as many as 10,000 more people seeking a winter wonderland experience.

About 1,500 of those will ski or snowboard at Arizona Snowbowl off of Highway 180, especially now that the resort makes its own snow. But the rest of the visitors are looking for sledding hills and snowmen. Most of those cars funnel onto the same two lane highway north of town.

“There were thousands and thousands of cars parked alongside the roads,” Driscoll said. “The Snowbowl ski area was at capacity. And we had officers up there responding to complaints of people coming onto private property, of minor traffic accidents, of vehicles blocking roadways.”

At the same time they had domestic violence calls, traffic accidents involving injuries and a lost child. Driscoll said he only had four officers on duty to handle all of those calls in a county that’s roughly the size of Switzerland. He said it doesn’t matter if you’re a deputy or an ambulance driver, you can’t get through when it’s gridlocked.

“Our infrastructure will not support the kind of traffic that we are seeing,” Driscoll said. “My belief is that we have over-marketed our capacity.”

Driscoll said it’s comparable to having just one road in and out of the Cardinal's stadium on game day. If you closed off all the other roads, it would take hours to clear.

It’s 22 potential holidays and weekend days out of the winter when out-of-town visitors come to Flagstaff, a town built for 70,000 people. Then in the summer when temperatures hit 110 degrees in the Valley, there’s another rush, but those visitors are more spread out.

Many Flagstaff locals said the increased visitor traffic along with new commercial and residential development are pushing Flagstaff at the seams. Kat Shipley and Tekly Berhe are bartenders at Rendezvous in downtown Flagstaff.

“I hate it,” Shipley said. “[The traffic] is awful. Everyday. It seems like it’s way worse, you know.”

“The city’s too small for such an influx of people,” Berhe said. (Photo courtesy of Snowbowl Arizona
Since Snowbowl started making snow in 2012 with reclaimed waste water, it's been able to stay open more than 100 days a year with last year at an all time high of 146 days. Snowbowl general manager J.R. Murray estimates a $40 million impact on the local economy per ski season.

Seventy percent of Snowbowl visitors are from the Valley, according to the resort’s own survey. Across the street you’ll hear a different take.

“From a locals perspective how can we be so selfish as to say that Flagstaff is all ours and everybody else stay out?” said Lisa Lamberson owner of Mountain Sports outdoor apparel and co-owner of Bright Side Book Shop. “From a business perspective I am incredibly grateful that we have millions of people that live that close to us that they come to our community and they support our restaurants, and our retail locations, and our hotels. It’s a major part of our economy here in town.”

The fact is visitors support 8,000 jobs and in 2016 Flagstaff’s bed, board and beverage tax (BBB tax) brought in almost $7 million, according to the Flagstaff Convention and Visitors Bureau.

“So that includes employment,” Murray said. “And that includes sales tax. And certainly we see a boost and have since we made snow in the BBB tax. And the winter receipts on that tax alone has increased every year since we started making snow.”

Murray said Snowbowl has been able to stay open more than 100 days a year with last year at an all-time high of 146 days. (Photo by Laurel Morales - KJZZ
Visitors support 8,000 jobs, according to the Flagstaff Convention and Visitors Bureau.

“Depending on your perspective it’s either 'carmageddon' or 'snowmageddon,' where traffic is just going to be horrific all day long and you’re going to be trapped in your home not going to be able to get out of your neighborhood,” said David Wessel, manager for the Flagstaff Metropolitan Planning Organization. “Or it’s the day where you’re going to set sales records and make all kinds of money selling food, hotel rooms, plastic sleds.”

Wessel and a county group have studied various solutions from timing the traffic lights to building a bypass. He said there’s a new snow play area south of town that could divert traffic. But the snow is not consistent. And so far there are no plans to make snow there.