A Poisoned People: For Navajo, Uranium Contamination Is Environmental Racism Sadie Bill’s cabin sits at the base of Claim 28. She no longer lives here because of concerns of uranium contamination.
Laurel Morales
By Laurel Morales
November 20, 2017
Tweet

A Poisoned People: For Navajo, Uranium Contamination Is Environmental Racism 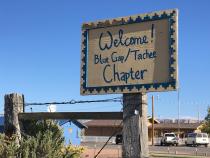 Laurel Morales
Many people who live in the Blue Gap-Tachee Chapter remember when the mining companies blasted uranium out of the Claim 28 site near their homes. Sadie Bill says dust from the mine explosions coated everything.
Laurel Morales
Chapter President Aaron Yazzie and Helen Nez spoke to Navajo and Washington lawmakers until the EPA finally put Claim 28 on the priority cleanup list.

This is Part II of A Poisoned People, a Fronteras Desk series on how the Navajo are contending with uranium contamination decades after the mining companies have left. Read Part I here.

Helen Nez had 10 children. Now she only has three. Seven of her children died of a disorder called Navajo neuropathy, which is linked to uranium contamination.

“Many people died and some have liver disease, kidney disease and some suffer from cancer as a result,” Nez said through a translator.

When she was pregnant Nez and her children drank from a spring that today has uranium levels eight times that of safe drinking water standards. Four of her children died as toddlers. Three died in early adulthood. Their stomachs became bloated and their eyes turned a cloudy gray, according to a study for Environmental Science & Technology. The three remaining children, now adults, have health issues.

“It is worrisome and troublesome and you hope that something will be done,” Nez said.

In a new poll by NPR, the Robert Wood Johnson Foundation and the Harvard T.H. Chan School of Public Health, more than one in four Native Americans say the quality of their drinking water is worse than in other places to live.

From 1944 to 1986 mining companies blasted 30 million tons of uranium out of Navajo land. When the U.S. Energy Department had stockpiled enough for the Cold War, the companies left abandoning 521 mines. Since then, many Navajo have died of conditions linked to contamination.

Nez’s sister Sadie Bill drives out to an abandoned uranium mine called Claim 28. Along the way she points to the sight of her neighbor’s home that had to be hauled away it was so contaminated.

“She passed on about two and half years ago,” Bill said. “And this one over here she was on dialysis. And she passed on oh 8-9 months ago.”

We drive by four more homes where people have died.

“People on the outside world say, ‘What’s wrong with you? Get out of there. Move!’” said Chris Shuey, the director of uranium impact assessment at Southwest Research and Information Center. “That’s not economically or culturally feasible. People have been captive to these exposures now for three generations.”

Shuey, an environmental health scientist, has been studying the impacts of uranium mining on the Navajo people for almost four decades. He points out Navajos are connected by tradition to the land. When a Navajo baby is born the umbilical cord is buried in the ground, tying them to that place forever. (Photo by Laurel Morales - KJZZ)
This mesa is the site of the Claim 28 mine. Scientists say the springs where many people drank have uranium levels eight times that of safe drinking water standards. (Photo by Laurel Morales - KJZZ)
The community is worried about their cows and sheep that eat the plants that may be contaminated.

The community and many others like it want to know why it’s taking the federal government so long to clean up the abandoned mines.

“The slow pace of cleanup is directly related to the law, itself,” Shuey said. “The law places more importance on the relationship between EPA and the companies that caused the problem than it creates a right of sitting at the table of the local affected community. And so on Navajo that is institutional racism.”

In this case, Shuey said the policies of the Energy Department, the EPA and the tribe have hurt the Navajo people.

Of the 521 abandoned mines the EPA has only cleaned up nine so far. And Shuey said cleanup presents a lot of challenges.

“There’s not a lot of places to take this stuff to,” Shuey said. “You invariably put it in somebody else’s backyard.”

The EPA said in a statement the federal government has reached settlements valued at $1.7 billion with mining companies -- enough to clean up about 40 percent of the abandoned mines.

“The EPA is really caught between a rock and a hard place, said University of New Mexico toxicologist Matt Campen, who’s studying the air quality surrounding abandoned mines. “They get attacked by both advocacy groups for not doing enough and by industry for doing too much.”

Campen said it comes down to allocation of resources and authority to get things done. A Navajo group is currently evaluating the cost to remediate the mine near Helen Nez and her sister Sadie Bill’s home.

“We lost too many people,” Bill said. “We don’t want our future young people to have to go through this again.”

At the current rate, it would take multiple generations for the Navajo to be free of uranium contamination. For this family and for many others though it’s already too late.