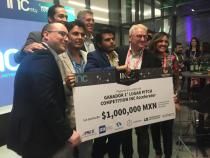 Rodrigo Cervantes - KJZZ
Members from the Phoenix committee visiting IncMty festival in Monterrey share smiles with the winners of the Inc Accelerator contest. 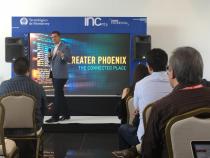 Rodrigo Cervantes - KJZZ
Chris Camacho, President and CEO of GPEC, on a presentation about Metro Phoenix's achievements on innovation. 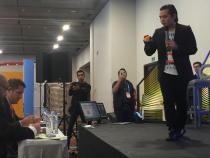 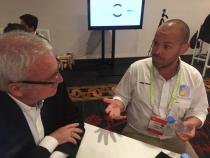 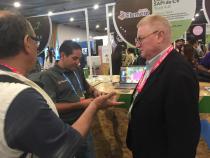 MONTERREY, Mexico — Phoenix wants to be a leading “smart region,” a place where innovations would be used and developed. But it also wants to attract global tech businesses and entrepreneurs with a new strategy — especially those from Latin America.

Yoku Sashida is on stage at the Pabellón M building in Monterrey, the industrial heart of Mexico. The young man is a college student from Guadalajara, and he’s pitching an invention to U.S. investors. The prize? One million pesos; about $540,000.

“My name is Yoku Sashida, and I invite you to save the lives of millions,” he says.

Yoshida developed a glove that can read what’s happening to your heart, say, during a heart attack. His company is called E-C Glove and he gets five minutes to sell his idea.

Greater Phoenix Economic Council CEO Chris Camacho is one of the judges. At the end, he asks Sashida how important the glove is for the entire device.

“Actually, it’s not that important, the glove is just an accessory,” Yashida replies, while giving financial, technological and administrative details from his business.

About 10,000 people are attending this event and almost 100 teams are competing at what’s known as one of the largest entrepreneurship and innovation festivals in Latin America: IncMty.

The summit, coordinated by the Tec de Monterrey university in Monterrey focused on how technologies may transform health, learning, art and recreation, energy, business and collaboration.

“Our goal is to continue to support this event, as many other events, as we continue to pursue our dream, which is to help Latin American companies grow and scale in the United States,” Camacho said on stage for the opening ceremony.

GPEC is one of the main sponsors of the congress and is hunting for entrepreneurs as they launch their Global Growth Accelerator, a business assessment office created with Arizona State University to help foreign companies and startups establish in the U.S..

A committee of 10 Arizonans is here with Camacho, including Mesa State Senator Bob Worsley, who is also chair of the transportation and technology committees.

“I love to be around people who’s starting new business ideas. It’s just in my DNA,” said the senator.

Before politics, Worsley made his name as an entrepreneur and an investor. And just like Camacho, he finds natural connections between Monterrey and Phoenix: two cities of about 4 and a half million people with two top engineering schools. Two cities with the intention to become meccas of innovation and entrepreneurship.

“We believe that Arizona should be much more cross-border-centric and open, and there’s been a lot of language from my government that maybe disrespects the tremendous intellect and ability of the people here in Mexico,” Worsley said.

He is at IncMty specifically to look for talent for his city, he says. Mesa wants to become a — technologically speaking — “smarter” city, with cutting-edge technologies that can improve the citizens’ lives.

Not everyone at IncMty came for money for their projects. Most of the participants in the conference are young innovators seeking for contacts and mentorship, what business people call “acceleration."

One of the mentors was Todd Hardy, senior economic development adviser at Arizona State University. He is coaching a company from Tamaulipas with an app for monitoring vaccines, called “My Baby’s List."

Once the session’s over, the creators of My Baby’s List walk away with some advice and a good contact in Phoenix.

“I think it’s an interesting idea! You gotta pursue it!,” tells Hardy to the entrepreneurs as he shakes their hands.

Josué Delgado is the CEO of IncMty. He says the festival is putting together Latin American talent with investors and experts from the U.S. that prefer action rather than rhetoric.

“Many of them are Americans that don’t care about the policies in the United States, they are people who work, that innovate and want to develop an open economy,” Delgado said, who also believes Phoenix and Monterrey are complementary.

“I’m convinced that economic regions are going to be determined based upon innovation capacity led by entrepreneurs,” said Camacho.

And after three intense days of conferences, pitchings, networking and assessments, IncMty reaches an end. But before that: table drums announce the winner of the best pitch: Polybion, a startup focused on eco-friendly construction materials.

And if you are wondering what happened to E-C Glove, well, they won the far from worthless third place.